40 Mile is not the easiest ghost town to access. We were told by several people that one could only get to it by boat—88 kilometres downstream from Dawson City. However, I’d read some fascinating historical stories abut the Yukon’s “first” town and wanted to explore it!

I’m especially fascinated with one story about an early gold miner who camped alone near 40 Mile; a pack of nearly 100 Arctic wolves were the closest thing to companionship that he could find through his first Arctic winter.

I am a big lover of wolves and you can read about my own amazing Arctic wolf story in an earlier Boho Wild post.

We were thrilled to discover that a recent logging road makes it accessible from the Top Of The World Highway. 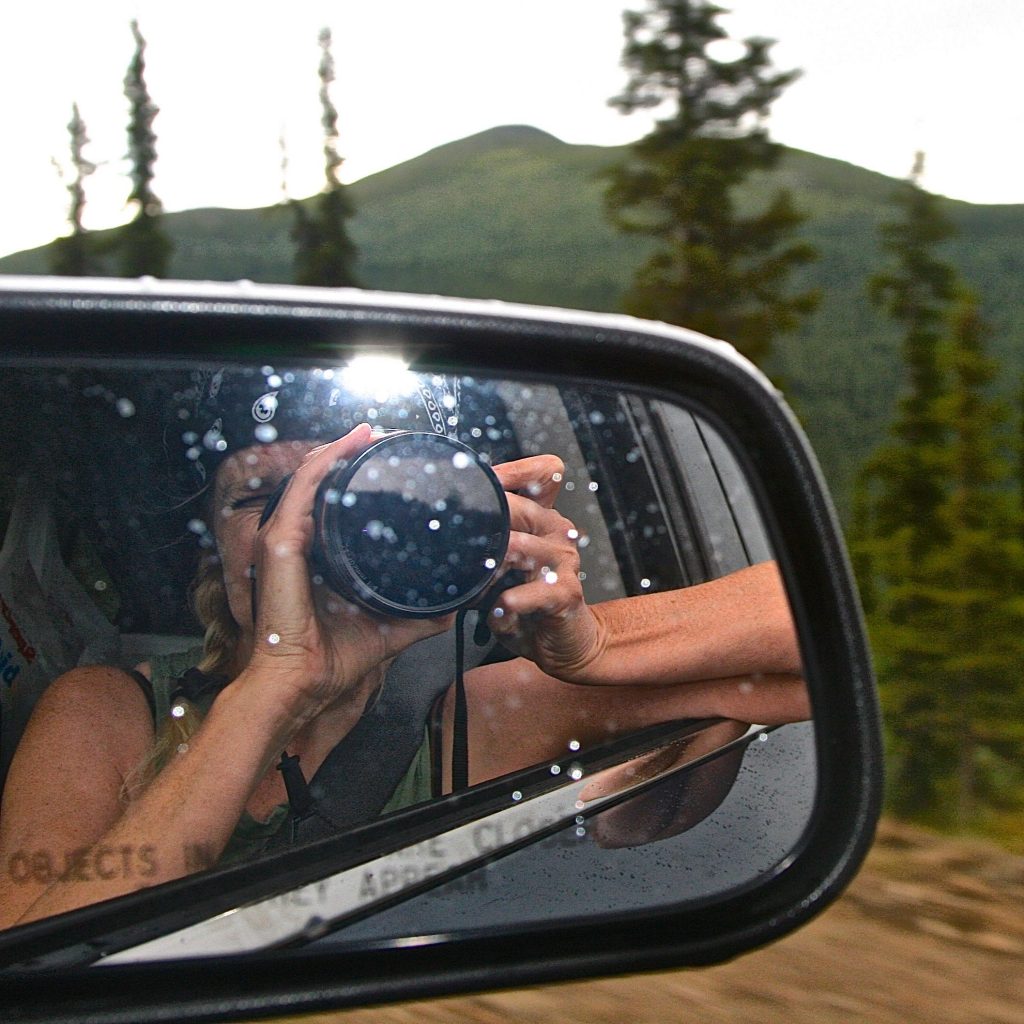 We were caught in a few torrential downpours along the gravel highway. The highway turned muddy and slippery; with all the highway’s twists and turns, potholes, and no shoulder, I feared we might slide off “The Top Of The World” at any moment!

After many kilometers, we turned onto a logging road much like the highway: gravel and crossing on the very top of mountains, with steep drop-offs on both sides. Although the logging road was narrower, muddier and seemed to take forever before we finally started our descent to the river, the vistas were gorgeous! Our 4WD made it to the Yukon River and from there it was a 2km mosquito-filled hike to the townsite.

Below is the logging road as we finally descended towards the Yukon River:

40 Mile exists on the land between the merging of the 40 Mile and Yukon Rivers. First Nation peoples have used this area for thousands of years to fish, hunt, and trade.

In the late 18th Century, First Nation, Hän speaking peoples came to the area where the 40 Mile and Yukon River’s merge to trade; these peoples were known by missionaries as Fortymile people–hence the name of the town. Forty Mile is Yukon’s “first” town: in 1886 miners began to arrive and build cabins in this area. In 1893, 40 Mile peaked with a library, billiard room, 6 saloons, a theatre and restaurants, 2 doctors, 2 blacksmiths, a watchmaker, dressmaker, and several rum and whiskey distilleries. 1*

40 Mile is now a ghost town; the townsite is preserved and excavated by Tr’ondëk Hwëch’in Heritage, Yukon Government.

Above: the first RCMP barracks in the Yukon.

Me, beachcombing near 40 Mile below–so many fascinating things get washed down rivers and are deposited on the banks.

The old machine shop in 40 Mile below:

Below: Peter inside the back of the machine shop. The staff area still had ancient wallpaper on the walls. The wallpaper was attached to muslin style fabric and the fabric hung on the walls. I admit I am fascinated by the beauty I find in old, decaying things–if it is left untouched by everything but time, time manages to make beautiful art!

Below: the riverbanks are covered in fireweed, lupine, and delphinium flowers.

Peter took this picture of me, trying to capture the beautiful Arctic flowers at Forty Mile, Yukon.