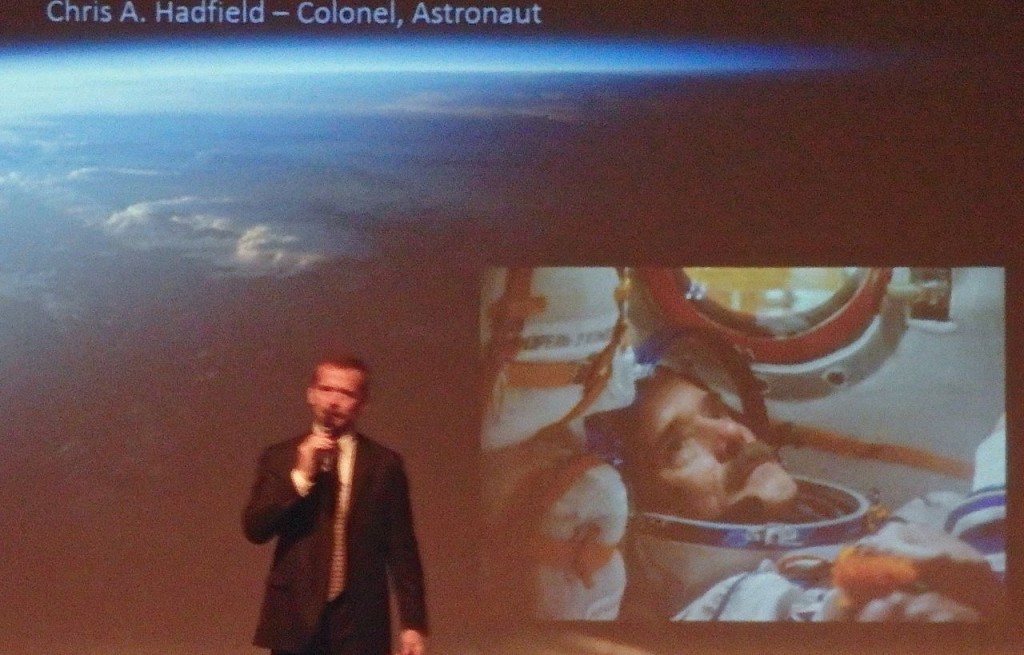 I was fortunate to attend a talk with Colonel Chris Hadfield this week. Chris is one of those rare beings who is blessed with eloquence, kindness and intelligence. I rarely fall in love with a speaker, but when I do, I fall hard: His Holiness the Dalai Lama was (and is) my last crush. I have added Chris Hadfield to my crush list. 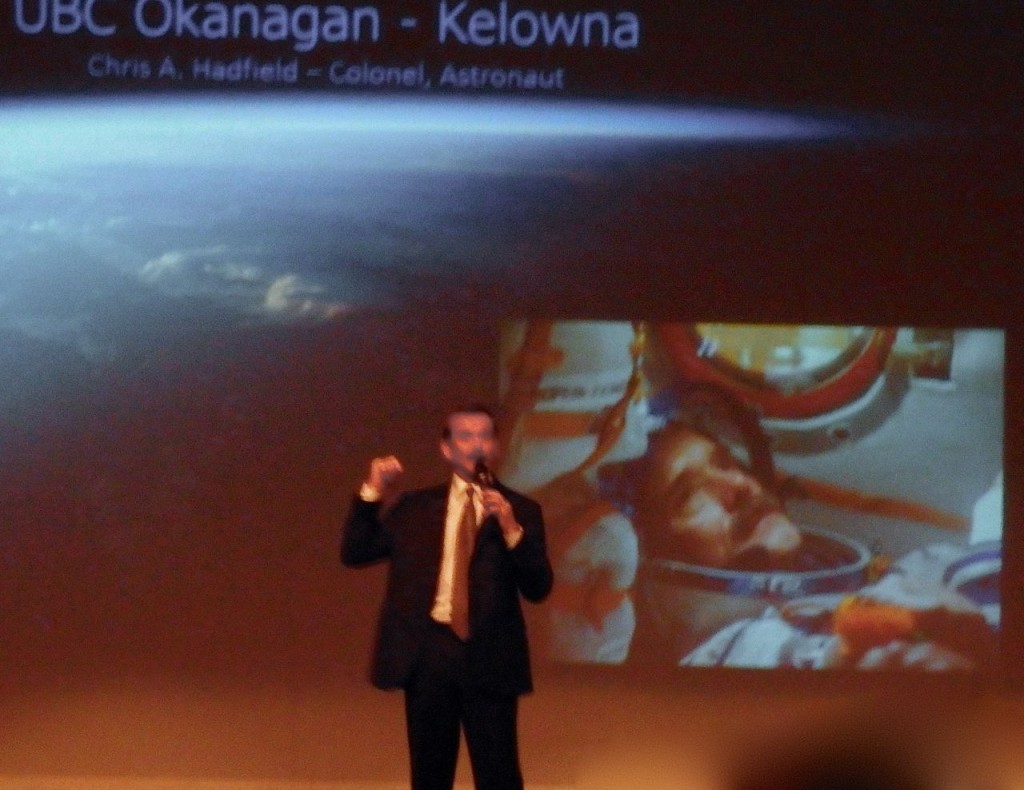 Things I learned from Chris Hadfield:

Chris spent 1/2 year in the Russian space station, orbiting earth. The speed of the station is impressive: it crosses Canada from coast to coast in ten minutes.  Viewing earth from space gave Chris an interesting perspective on life. A few of his ideas revolved around the beauty of earth: the colours, shapes and textures—like a modern painting masterpiece.(I always imagined that, of course, the earth would be so lovely from space, as up close, she is beyond beautiful too).

Chris is concerned about the low water levels in Canada’s  Great Lakes (the lowest ever recorded), as they contain 1/5 of the earth’s fresh water. From space, the lakes look like little puddles that could dry up on a hot day (in terms of a more galactic perspective, they could).

Man-made earth destruction is evident from space—these are the wounds that we made with our greed and short-sighted thinking; such as, irrigation systems that have causes entire seas to dry up.

He also pointed out that humans exist in the narrow skim on top of the earth’s crust. Such a small, seemingly insignificant amount of universal space—yet, we believe that our skim of space is as big as the universe and abuse it as such. 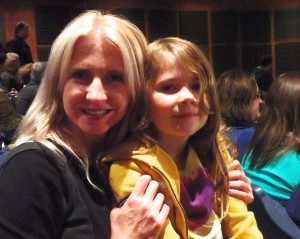 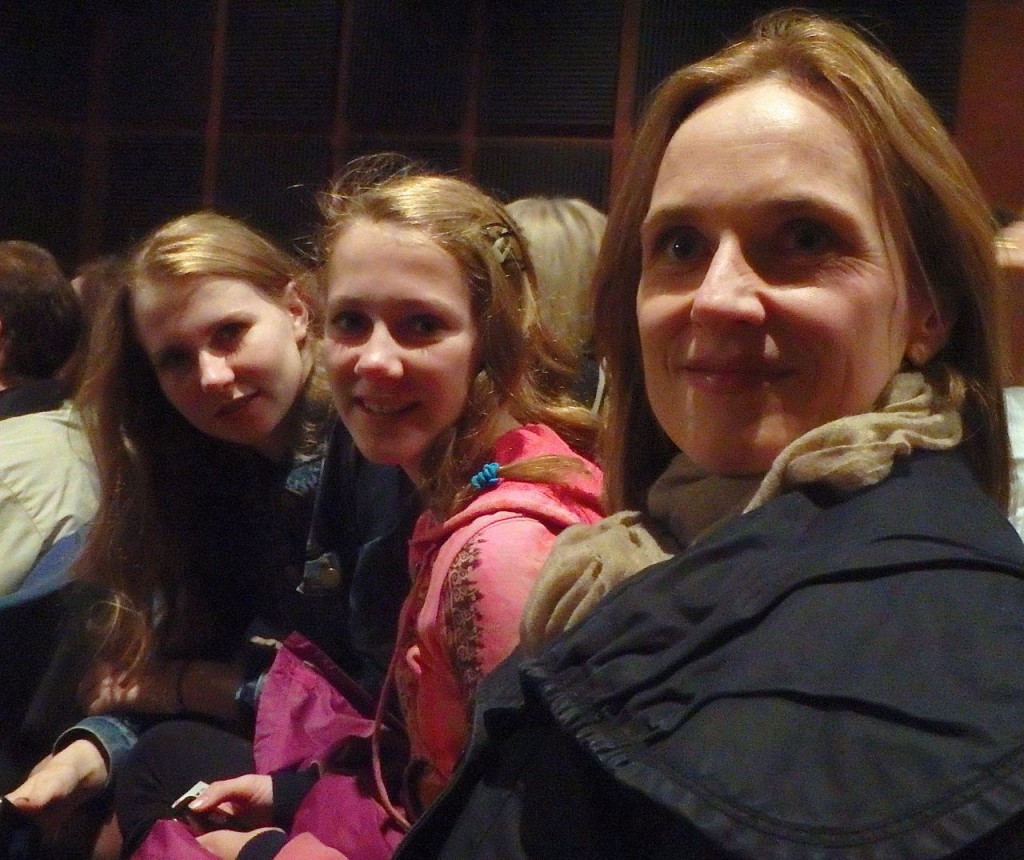 How did Chris get to this point in his life?

Chris had a goal as a young boy to become an astronaut. He joined the military to train to be a pilot and also completed a few university degrees. He is one of the most accomplished, talented military pilots ever. He is also so personable, I am sure if you ever find yourself trapped in a space station, you’d want to be trapped with a guy as socially gifted as Chris. He is blessed with three children and a wife. His wife, Helena, spent many hours, days and months as a single parent while Chris strived for his goal to become an astronaut—one cannot be a space-boy or space-girl and have children unless they have a partner, who is willing to dedicate oneself to raising a family solo at times.

My daughters and I attended Chris’ talk together and met my sister there. Pip raised her hand 4 times during question period. After the fourth try (the volunteers with the microphone ignored her), I asked her what her question was. She sat down, lowered her hand and looked at me perplexed. “I don’t know. I forgot it.” —raising her hand, on cue (after Chris had politely answered each question) took all of her energy and the question was forgotten!

Pip has been teaching herself Russian for the fun of it. After hearing how Chris had to learn Russian in order to be on board the Russian space station, I now feel obligated to truly encourage Pip and her Russian interests.

Chris is a super star and will probably never read this post but just in case….I have two questions for Chris and one suggestion:

*I’ve designed a resistance machine that will exercise an astronauts hips to prevent osteoporosis (Zumba twerking is the inspiration behind my design—twerking inspired movements are excellent for all of the pelvic, butt, ab and hip muscles).

…can you hear me Colonel Hadfield?