Havana is a city rich in culture, history, politics and contradictions. My advice to all cyber travellers is to jump right in; but beware, Cuba isn’t often as it appears.

Havana: hot, humid, organized around four city squares of towering, dramatic and often ghoulish architecture–crowded with pleasant people, skinny dogs and scam artists. Havana is like Spain, if it were in a parallel universe where everything is more edgy. 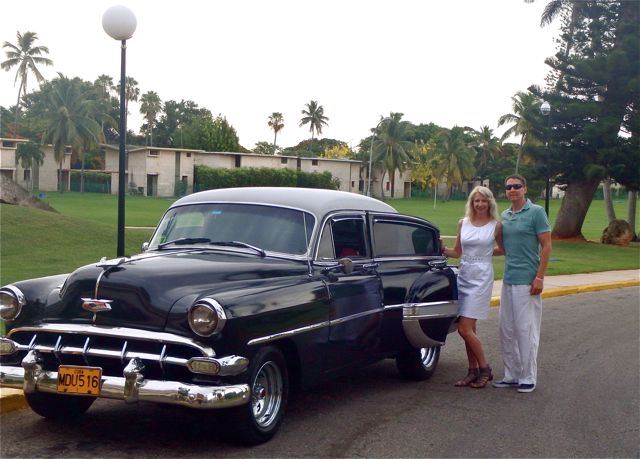 We hired Cobain and his 53 Chevy taxi to drive us into Havana for the day. The car has been in Cobain’s family for three generations. His grandfather drove it, then his father and now, Cobain.

Havana may just be the craziest city I have visited to date–so much happening that it took me by surprise.

We got scammed: The Baby Milk Scam. In fact, strangers tried it on us twice: once in Havana and once on the streets of Varadero. We lost little money to the scam in Havana and told the scammers in Varadero where to get off–once scammed, forever alert. 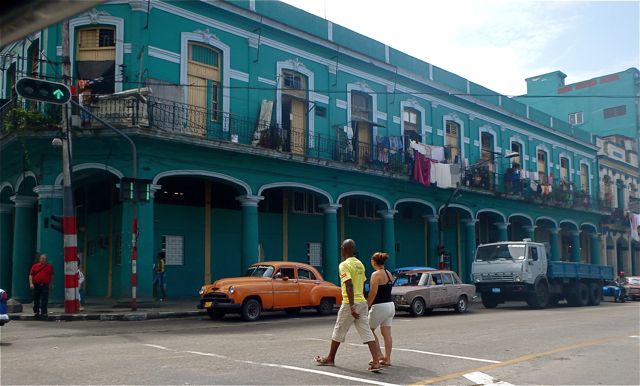 It seems the entire population of Havana’s streets are connected and in on the milk scam; either that or everyone turns a blind eye. It started in Central Havana, trying to find an Art Gallery. A Cuban man engaged me by saying, “Ola where are you from?” I basically ignored him and kept on walking; however, I stupidly said, “Canada,” as I passed by–never do that. Trying to avoid him caused us to walk right by and miss the Art Gallery Entrance. We walked right on by only to have Peter accosted by scammer #2 trying to sell him cocaine.

Unable to locate the gallery with our map, we ended up entering a shop that sold high quality art posters (which we assumed was the gift shop entrance to the art gallery as it had uniformed security and staff). The workers either could not understand us or pretended not to. Suddenly, a well dressed Cuban man appeared to answer our concerns. Using my Spanish/English dictionary, I explained we were looking for the big International Art Gallery. He assured us it was just outside the doors and he would point the way. Assuming he worked in the store (as the uniformed security in the shops happily let him take over talking to us), we followed him.

Once I realized the trip was leading us down the block, I said no, we weren’t interested. He assured me it was the next shop. Which, it was; though, it was a lower calibre Cuban fine art store selling Cuban paintings. He tired to lure us deep in the store. We said no thanks and Peter offered him a tip to get rid of him. This is when things fell apart. He refused the money. Yet, he would not leave us alone. He insisted he needed baby milk formula for his baby at home (brought out wallet picture). He said that milk is rationed in Cuba and he cannot buy more yet tourists can. If we could buy him milk from the store across the way, he would be very grateful.

Since indeed the  market shop was across the street and I wanted rid of the creep, I persuaded Peter to go with me and buy the guy the baby milk at which point we’d be rid of him.

Once in the shop, people appeared from out of the woodwork: other men, obviously in on the scam, men we recognized as the first ones to accost us to buy cocaine. The woman behind the counter slapped two bags of milk on the counter at which point the man kissed me, thanked me, grabbed the milk and exited the store along with his cronies. No matter how we tried to find out the cost of the milk, the woman ignored us until the milk had long left the building. Then she laid the $12 pasoes price on us (about $13 Canadian). Indeed, once we were gone, the milk would be placed back under the counter for the next stupid tourist.

The scam involved at least half a dozen people that we were later aware of. Sometimes, it feels that in Cuba, everyone turns a blind eye and lets the underworld get to work uninterrupted. No one seems to care. An underbelly of a dog eat dog society amongst such a pleasant, non violent society and hardworking people.

We were lucky. $12 is not much of a price to pay for being taken for fools in Cuba. If it had been any other culture, we’d no doubt had weapons drawn on us. Oddly, the very next day, in Varadero, 2 women tried the same scam on us. We told them to get lost but they were so persistent, I had to physically push my hand in their faces to get them away so I could enter the shop. Beware: if the shop has two bags of powdered milk under or on the counter for easy access, they are in on The Baby Milk Scam.

Havana in a day is difficult. However, Cobain was an expert and took us to all the highlights. My impression is that of a very crowded, more gritty, fascinating take on Spain. The historical buildings are all Spanish and crumbling. Yet, Cuba has gone to great lengths to restore some of the historical buildings and squares, which is very impressive. I love Havana’s beauty, the old and decaying hold some kind of magic and mystery for me. The entire city is built around four main urban squares, where commerce and religion meet. 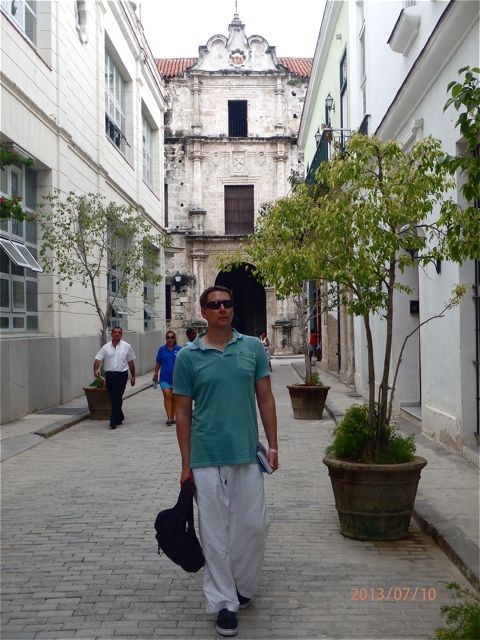 With Raul Castro recently opening up avenues for small business, the Havana locals are taking advantage! A fellow traveller friend I met at our hotel (born and raised in Havana but now residing in California) spoke of his morning in Havana. An old friend stopped him as he walked through his childhood neighbourhood. The old friend asked if he’d like to stop and chat over breakfast. My California friend said sure. His Cuban friend then hollered up into the sky,  “I’ll have 2!” (in Spanish). Suddenly, high above them, from an apartment window, a man appeared and lowered a basket onto the street. Inside were two Cuban style breakfasts. His Cuban friend dropped some pasoes into the basket and up it went again, disappearing into the open window.