This post and recent past posts follow my family’s adventure vacation in the Costa Rican jungles of the Osa Peninsula. They are some of my most challenging posts to date. Challenging, because I learned much in the jungle; I saw, heard, touched, smelled, tasted and felt more than my mind could easily process. It’s overwhelming for me to try to communicate such a profound experience in several blog posts. I tell people that I found God in the Jungle, and in the same breath I add, there is no God in the jungle. I will attempt to explain what the jungle taught me on both a primal and spiritual level in a post following our adventures.

However, in today’s post, I share a glimpse at one of the most fascinating days of my life in Corcovado National Park, in the Oso Peninsula of Costa Rica. We encountered so much wildlife that this post will be devoted to the four monkey species found in Corcovado.

This post is full of photographs of some of the most fascinating primates on earth. I hope you scroll through and visit them all.

*Ideally I would have used a much more powerful zoom lens; though, I managed to get by with what camera equipment I brought.

After a 2 1/2 choppy boat ride on the Sierpe River and then the South Pacific Ocean, we arrive at Corcovado National Park in Costa Rica. “The Most Biodiverse Place on the Planet,” according to National Geographic. Hiking through the Corcovado  jungle is the reason we’ve come to Costa Rica and our adventure is about to begin…

We wade through the South Pacific Ocean to reach the beach and then change into rubber boots and shorts. We are a within a short hike to Sirena Ranger Station, the heart of jungle life. It’s location is remote with only boat access, or a several day’s hike through difficult jungle terrain to reach it. If you’re going to see animals,  Sirena is the place.

*Follow all of our family’s jungle adventures here: Expedition Corcovado.

I’ve hired Caesar to be our guide as I’d read good reviews about him on the internet (one can only access the park with a hired park guide by law). Caesar has proven to be an encyclopaedia on Corcovado and the Osa Peninsula flora and fauna. I listen to his every word. I am learning more in this jungle than I ever did at my seven years of university. He is from the town of Sierpe in the Osa Peninsula and he speaks excellent English (self-taught reading the lyrics to Jamaican music). We are fortunate to be with Caesar. He is an amazing tracker. He follows smells and foot prints to find even the most illusive of jungle creatures.

There are 4 primate monkey species in Costa Rica: The Central American squirrel monkey, the capuchin monkey, the howler monkey and the spider monkey. We find them all in Corcovado!

The Central American squirrel monkey is the only monkey that is exclusively found only in the Corcovado region and no other place on earth. It’s numbers are vulnerable due to deforestation. It’s tail is not prehensile (it cannot use it as another arm). It uses its long (lion tufted) tail for balance. The squirrel money is the smallest of Costa Rica’s monkeys. it is a quick and agile little monkey with an angelic face. 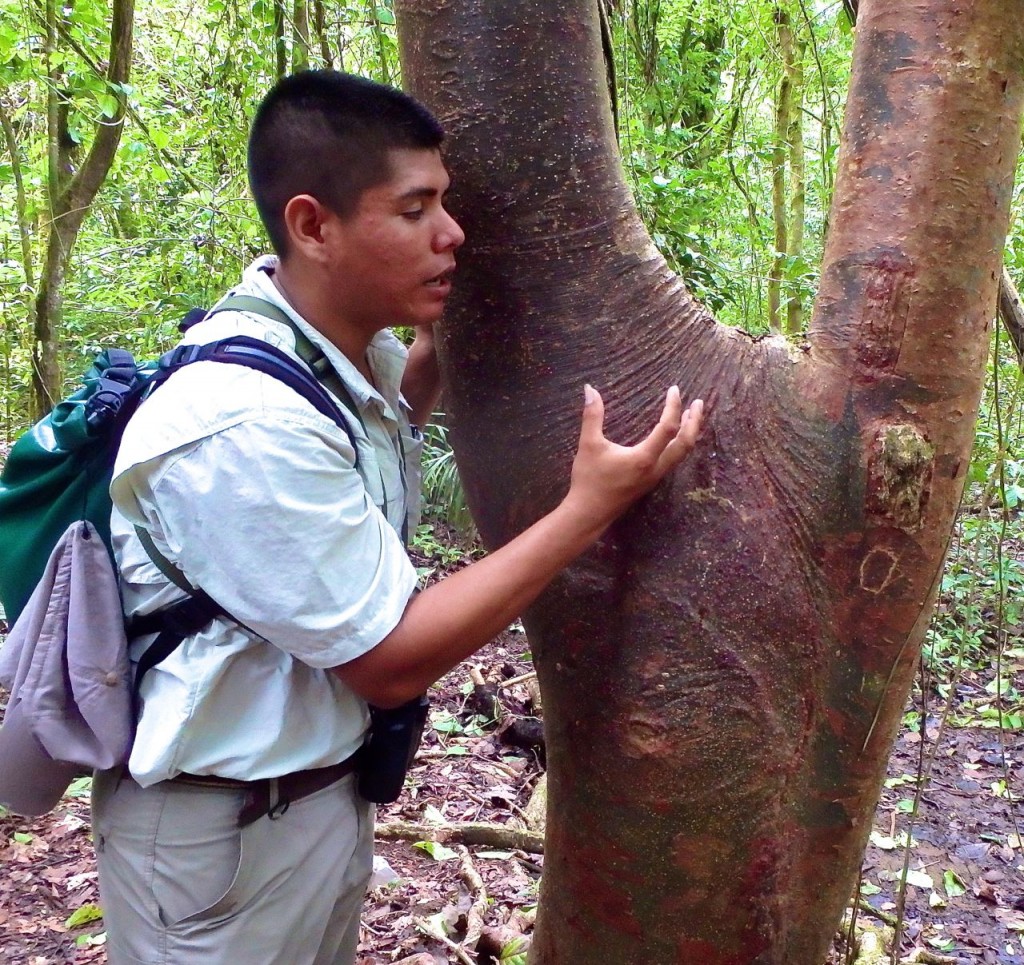 Caesar and the “gringo nose” tree.

it’s survival of the most adaptable in the jungle. The extreme wet and dry seasons are not for the weak. The Gringo Nose Tree is drought resistant (named obviously for the fair skinned foreigners whose noses burn under the jungle sun). In dry season it sheds all of its leaves and the bark peels to reveal green bark underneath. The bark has tiny white bumps that absorb oxygen while the green bark performs photosynthesis. When rainy season returns, the bark turns brown and it buds new leaves.

Capuchin monkeys are the most intelligent of all new world monkeys. They work as a tribe to hunt and kill. They are also the most curious of the New World monkeys. They make a point to check out any human in their territory. The tribes usually have many babies with them and thus don’t like humans getting too close.

I notice that when they grow tired of me following them around with a camera, the adult monkeys shake the tree branches ferociously and shriek to frighten me–by thrashing around and moving large branches, they seem to be a much a bigger creature in the tree. I take this as my cue to leave them alone.

Spider monkeys are the largest new world monkeys. They have a prehensile tail which they use as an extra arm as you can see in the below pictures. I find spiders to be the most comical and relaxed of the monkeys as they are always doing interesting acrobatics high in the tree tops. Their quick reactions and tree gymnastics must inspire their name.  How can one not fall in love?

Howler Monkeys are the loudest terrestrial animal on earth. Their deep roars are heard easily from over 5 km away. Their calls are humbling to listen to. I adore the intelligent faces that stare down at me and my camera from the tallest trees in the jungle. One howler points its finger at Pippi down below as though to say, look at that little human down there! I find howlers to be the most illusive of the new world monkeys. They tend to stay up high in the highest trees and not move around much. I can hear them but they’re not easy to find! Sometimes they just like to chat to one another while sitting in neighbouring trees or on a large branch together.

You can hear one of their more “quiet” type of chats on the video below:

When it’s a quiet afternoon at Sierpe del Pacifico (the jungle property I’m temporarily living on) and it’s only me and my camera and the howlers above, I talk to them. I tell them how awesome their voices are and how much I enjoy their morning calls. I also tell them how beautiful they are. It’s a quiet exchange before I leave them in peace. They’re very quiet while I talk and they don’t say much back to me, but they listen.