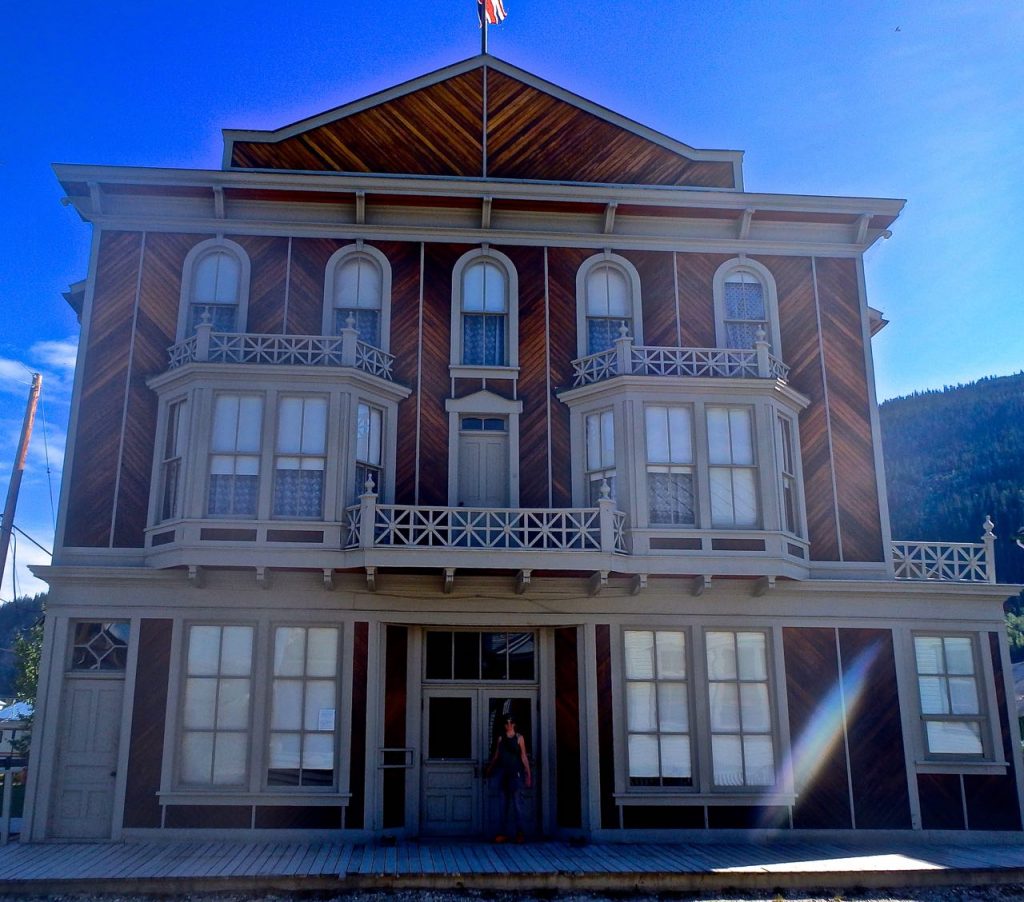 Above: The theatre: this building burnt to the ground; then it was rebuilt and restored to its original splendour.

This is the final post about my recent Arctic Adventures; though, it won’t be the last. The Yukon captured a part of me and I must return to try and find it.

Dawson City, Yukon is synonymous with, “goldrush.” In 1896, gold was discover near Bonanza Creek and within two years the city of Dawson City was born as a permanent settlement—population exploded from near zero to 30,000 people in just two years!

However, the Tr’ondëk Hwëch’in (People of the River) make up about a quarter of Dawson City’s population today, and their ancestors have lived along the Yukon River for thousands of years; though, their more permanent settlement was 88 km down stream from Dawson City, near 40 Mile. As gold began to be discovered in other Arctic rivers and creeks, the crowds quickly thinned and the population of Dawson City dropped. Today, the town has about 2000 full-time residents.*

I hope you enjoy the photos of a few of the Klondike’s impressive architecture. For buildings that went up in a hurry, they are spectacular!

Above: a block of the town that has not been restored. I love the decaying buildings maybe even more than the restored ones?! They are like people–even when they vanish and become invisible to the human eye, their story exists.

Dawson City is like a beautiful dream that hides ugly environmental destruction.

Entering Dawson City from the Klondike Highway is at first bewildering—what are those mounds, hills, and mountains of gravel and rock? Then it becomes horrific when you guess the answer: mine tailings. The mine tailings destroy creeks, riverbeds and forests.

The town/area of Dawson City has applied to become a UNESCO heritage site. I’m all for it on one condition: they clean up the mine tailings’ environmental destruction. Leaving historical environmental disaster areas is not something UNESCO should support.

In the Arctic, human greed takes president over sustainability. With mining, the government turns a blind eye; there seems to be no environmental assessment and/or pathetic laws (that don’t require the giant mining corporations to clean up the messes that they leave behind).

Entering Dawson City from The Top Of The World Highway is much greener. You take a small ferry across the Yukon River and land downtown in a Klondike time warp!

Below: St Andrews Church–slowly sinking into the earth.

Much of Dawson City’s nineteenth Century charm has been painstakingly restored. The roads are dirt, there are no traffic lights, and the sidewalks are boardwalks. The streets appear almost exactly as they would have to the gold-rich eyes of the first permanent residents. However, the Canadian government has limited funds and thus, some of the buildings have not been restored and are drooping and crumbling.

Above and Below: Peter outside and inside the first Dawson City bank: The Bank of British North America.

I’d last visited Dawson City when I was a part of the vibrant, young, summer, student crowd. I remembered it as a bustling fun place with incredible heritage buildings a lot of summer-students.

Dawson City hasn’t changed much in over twenty-five years; though, many more of the heritage buildings have been restored and there is a lot more “tour bus” style tourism.

Above and Below: The Red Feather Saloon outside and inside.

The lovely Ode (above) was our evening tour guide.

I love Dawson City. Some say that it’s like a giant museum, but to me, it feels more like a true step back in time. I’ve been fascinated with Canadian History my entire life. Exploring abandoned and decaying buildings, looking for buffalo bones and fossils was a pastime of my youth (still is).

Diamond Tooth Gerties! Peter loves a good card game and so I was excited to introduce him to Gerties; also, I was excited to revisit Gerties as I remember catching a lift to Dawson City one weekend with a couple of young, government, water scientists—we spent our Friday night @ Gertie’s. Booze, gambling and cancan dancers—what’s not to love?!   I love that Gerties is a not-for-profit casino and all proceeds go back into the community. It’s named for a famous dancehall girl in Dawson City during the Klondike era: Gertie Lovejoy, who was lovely, petite, humble, and had a diamond between her front teeth. She eventually married a man of Dawson City society but had to endure societal scrutiny as it was hard to shake her dancehall past.* BTW, Peter loved Gerties

Below: Peter posing with our “clean” car—there’s no mistaking what highway we’d just come off (the muddy Dempster). To the right of Peter is the B&B where we spent the night, Bombay Peggy’s (formerly a brothel).

Above: Me @ Bombay Peggy’s

Above: This street scene looks nearly identical to the 1898 version of itself. The big scar out of the mountain exists in all pictures of Dawson City since it was first established.

Below: The Midnight sun—I took this picture through our bedroom window screen at 12:30 AM.

This picture takes me back and it hurts a little to not be there now…it looks so peaceful and I can smell the fresh Arctic air.

Below: Westminster Hotel, home of “The Pit”—bar opens at 9 AM.

Below: Klondike Kate was a real American dancer who worked in Dawson City during the Klondike goldrush. She was famous for knowing how to “mine” the miners who frequented the dancehall where she worked. Her technique involved asking the fella to buy her a drink after each and every dance.*

Below: This little, award-winning restaurant is named for Klondike Kate. The proprietor is French Canadian. I had some amazing poutine here.

The mansion below was once The Yukon Commissioner’s Residence. The residence is now a museum as it was built for an English style winter and the reality of a Canadian Arctic winter proved it too costly for anyone to heat!

Below: me on the steps of The Commissioner’s Residence.

Below: me inside the dining room of the mansion.

An abandon car near Bonanza Creek. The back seat still has button-upholstered leather.

Dawson City is a mixture of small clapboard buildings (above) and also grand colonial style buildings (below)—that look a little out of place in the Canadian Arctic.

I hope you get a chance to explore Dawson City one day—it is a fascinating slice of Canadian history and a pretty cool modern-day town too.