My family’s adventures at the Great Barrier Reef include a brief visit to  Lady Musgrave Island (an uninhabited island in the middle of the Coral Sea). The island is a true coral cay—formed from years of ocean currents depositing dead coal and sea debris along the edge of the Southern Great Barrier Reef.

Over time, the debris built up and birds soon stopped to rest on the small island. The birds’ dropping contained tree seeds, which sprouted in the nutrient rich, bird-poo and trees grew on the tiny island. As the trees grew, their roots helped keep the entire island together and hence, Lady Musgrave Island was born!

The island’s deep water lagoon  is unique to the Great Barrier Reef and has over 8 kilometres (3000 feet) of living coral surrounding it.

The natural lagoon, ideal for snorkelers. Rough currents are tamed by the reef; however, snorkelling too near the reef, one can get swept over the reef and out to sea.

Below, the Great Barrier reef at low tide with Lady Musgrave Island in the distance. The top of the coral is exposed to the sun and air; the coral excretes a mucus like substance, which act as a sunscreen, to protect the coral from the harsh elements for the few hours that it is exposed during low tide.

The reef forms a lagoon that enables boats to enter and anchor in the calm waters. The lagoon’s calm ocean currents make snorkelling near the reef easier.

Below: another view of the Great Barrier Reef and Lady Musgrave Island. You can see the calmer waters of the lagoon and the reef (on the left).

We arrive next to the Great barrier Reef on a giant catamaran. After a few hours of snorkelling, we take a smaller boat to Lady Musgrave Island.

Below: as we approach Lady Musgrave, it is evident that the entire Island is covered in a thick forest of pisonia trees. The birds nest in the trees and add more fertilizer for the island’s forest floor.

Below: Lady Musgrave Island’s sandy beach is made up of finely crushed shells and dead coral.

Lady Musgrave is a small island, and despite the sweltering heat, we walk around the entire perimiter.

The beach is fascinating. There so are many unique coral skeletons and shells that I could spend an hour studying a small section of the beach.

Shoes are mandatory on the Island because of the occasional poisonous crustasion on the beach.

The island is a protected natural area and thus, no shelling! It is wise not to shell on Great Barrier Reef Islands as there are venomous cone shells.

The shells are beautiful and I’ve capture a few specimens with my camera below:

Peter and Pip looking over heated under Queensland’s afternoon sun. 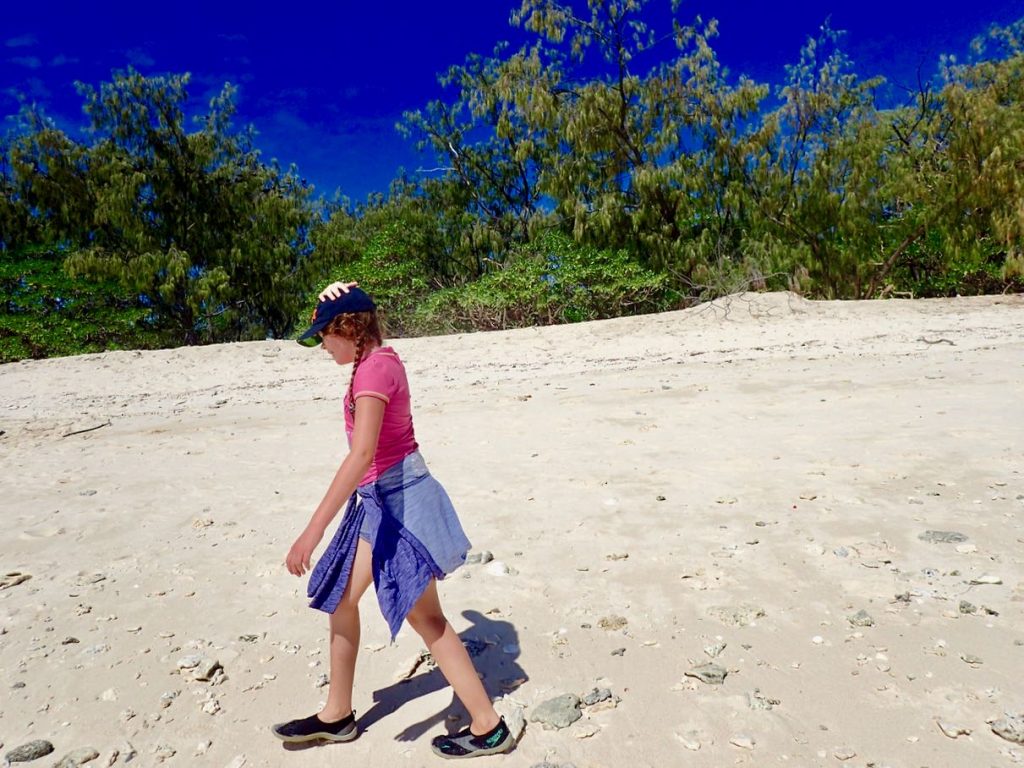 As we walk around the island, I imagine what it would be like to be ship wrecked on a coral cay. My first concern would be the lack of fresh water. I guess the birds survive by drinking water from the large pisonia leaves after a rain.

Below: we stay away from the sand dunes that border the forest—sea turtles build their nests in the dunes.

The Pisonia Forest on Lady Musgrave: The trees provide a slightly cooler, but humid escape from the sun.

We explore the pisonia forest, careful to stay on the trails as to not disturb the birds that build burrow-style nests amongst the tree roots.

The Lady Musgrave “mutton birds” have a unique call; they sound like a ghost howling and then a baby crying. Long ago, sailors would stop briefly but leave after one night, convinced the island was haunted!

The scent of Lady Musgrave will never leave me. It has a unique smell: heavy,musky, woodsy and yet fresh at the same time.

I hope you have enjoyed visiting a Great Barrier Reef coral cay with us. #SavetheGreatBarrierReef