We were only in Australia a day and a half before deciding to check out the Gold Coast. I wanted to see what all the hype was about. We took the train and then a bus to Surfer’s Paradise on the weekend.

The train ride was fun. I felt a 1970s vibe to the culture. Children wandered into the train alone (with their bikes) to take themselves to DreamWorld for the day (yes, the same park where 4 people drowned on a raft ride this past fall). 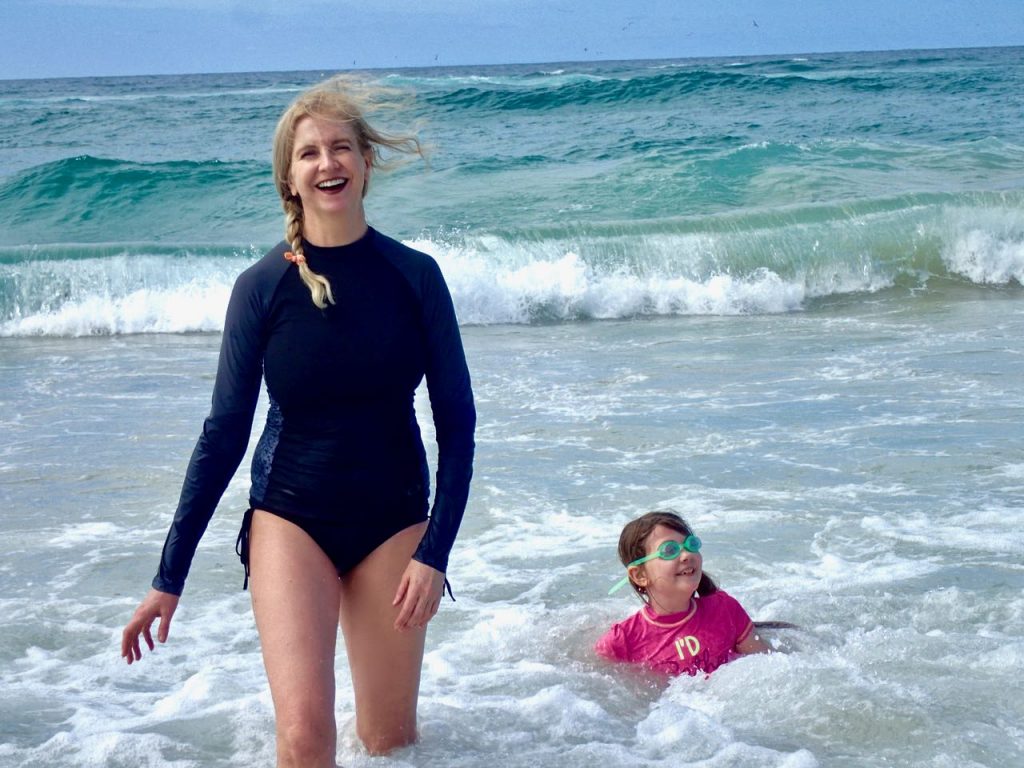 We chatted with a family of 5 young sibling and also a lone boy of about age ten. They were adorable and it was wonderful to see kids with the freedom to explore the world on their own, without the paranoid “helicopter parenting” that has become the norm in North America. I don’t know if the solo riding children were anomalies, whether parenting is more relaxed in Australia, or if society is safer for children here?

It was a rough surf day with a fierce undertow out to sea. The life guards continually shouted to everyone in the surf to stay shallow and on their feet.

Despite my injured foot, I managed to have some fun in the waves with Pippi. It was hard though, I like to jump and body surf but with my injured, foot bare, I knew all I could do safely was stand. Even that proved difficult and I was sucked under and slammed against the ocean floor a few times (bruises to prove it). Peter and Mist were still experiencing some jet lag and didn’t feel great on that day; thus, they were not in the mood to pose for pics.

I hope you enjoy a few pictures of the sunshiny Gold Coast of Queensland.

The Gold Coast is a mass of skyscrapers, but even the urban sprawl cannot take away from the never ending golden beach and turquoise thundering waves!

No shark bites and no jelly fish stings–a good day!

The great thing about being away from home is that the girls rely on each other and form a tight sisterhood.

Tabitha is a photography junky like me. She is never without her tripod!

Pippi is a true water baby. She never wants to leave the waves!

Peter watches Pip in the waves despite feeling under the weather.