On our last day in Cuba, I decided to check out some pre-Columbian caves once inhabited by various indigenous cultures of Cuba. The caves were frequented by both the hunter/gatherers– Guanhatabey and later the fishing/agricultural aboriginals–Taino.

The first cave (Cueve de Musalmanes) was a short hike through a coastal forest to a cave containing 2500 year old bones (discovered  in the 1980s). Peter found the hike a challenge as he was eaten alive by mosquitos.

I wasn’t touched–we didn’t have on repellant but for some reason mosquitos don’t like my smell and stay away. Also, I am one of the  rare humans who is not allergic to mosquito bites so their bite is completely unnoticeable on my skin (no redness, no swelling). I could be bitten by 100 mosquitos at once and no one would be able to tell (its a genetic thing I inherited from my dad–our ancestors must have evolved in pretty intense mosquito country for us to develop immunity).

The small section of coastal jungle seemed to hold no exotic dangers ( I assumed) as it is nestled in a narrow strip of forest between the Caribbean coast and a major roadway. But what that small section of jungle has, is an unbelievable amount of floral and fauna. We spotted a minimum of four different lizard species, so many cactus, flowers, swamp plants, many birds and, of course, the bee colony in the rock face that we carefully had to run past.

Most surprisingly was the bird tarantula. While walking naively along in my flip-flops, I suddenly came toe to hairy-toe with a giant purple tarantula! I was so surprised, I screamed and she quickly scuttled into a hole in the rocks and disappeared from view. I couldn’t believe my eyes; when does one share a wilderness path with a tarantula in one’s life time? It was such a thrill, I only wish I could have captured my tarantula on camera. I’ll never forget her glossy black body and hairy indigo legs. I talked with a local naturalist about my discovery and he was impressed–the tarantula is uncommon in the area.

We walked out of the jungle on to the roadway and headed west toward the largest and deepest cave (3oo meters) Cueve de Ambrosio to check out the pre-Columbian cave drawings. By the time we reached the cave Peter was hot and tired of being bitten by mosquitos; thus, he decided to sit outside and wait as I explored the cave. 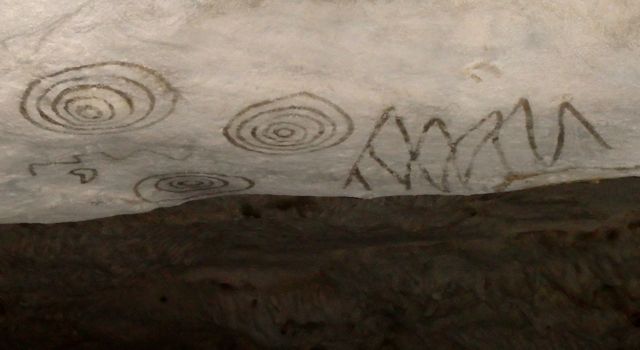 A guide appeared to take me inside Cueve de Ambrosio (with a flash light) to show me the drawings. The cave is big and dark and filled with five species of bats…I was happy to have a guide. He carefully led me to all of the individual cave drawings. While we walked, bats continually swooped down and called out to us. I was a guest in their enormous home. 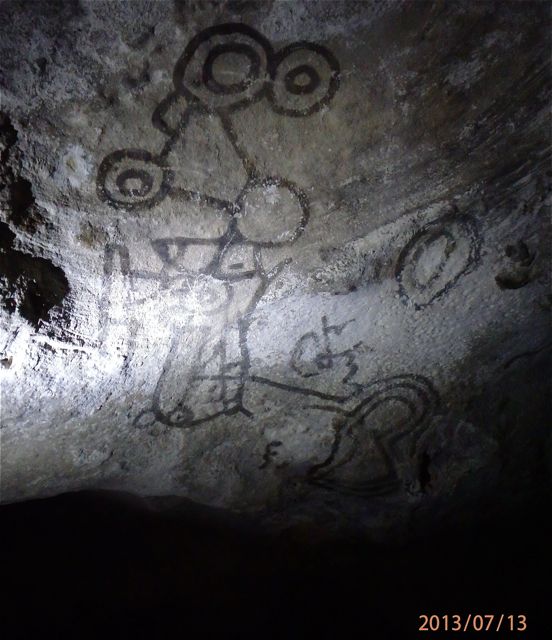 In all truth, bats might just be one of the gentlest mammals on earth. What other mammals would allow a human being to walk into their home (cave) and snoop around without any aggressive actions? I cannot think of another mammal that would behave in such a gentle and unthreatening manner as bats. 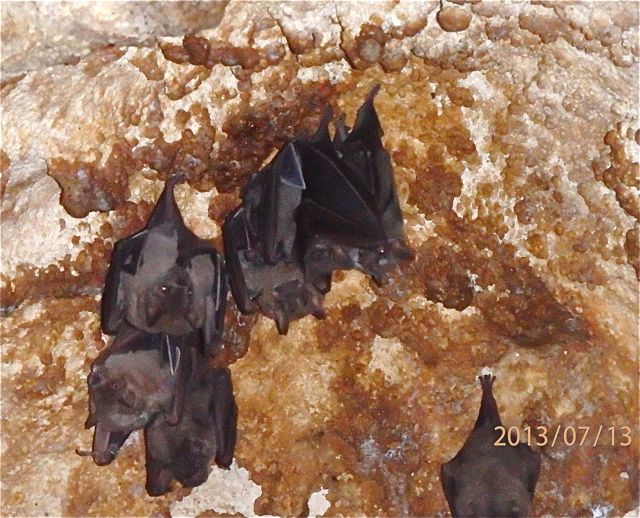 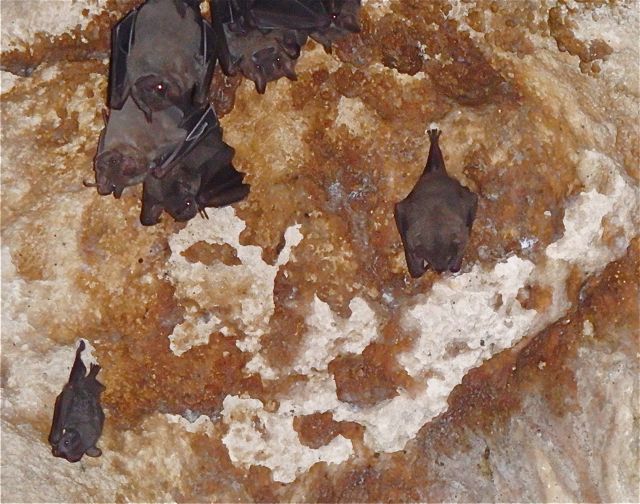 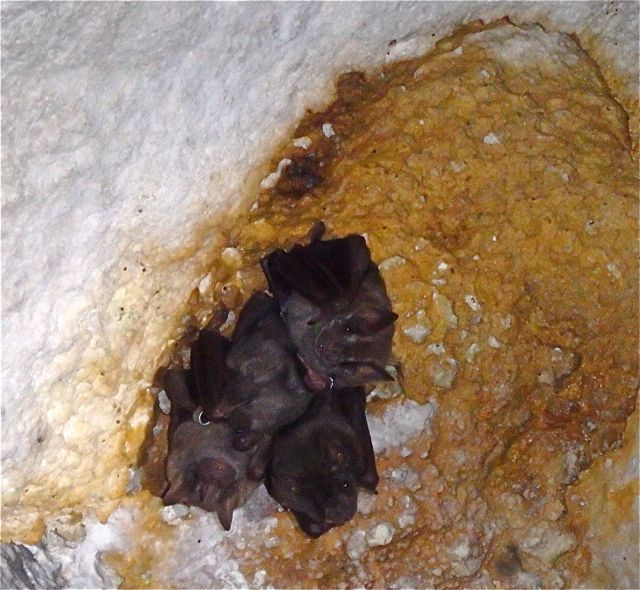 Once he’d illuminated the last of the cave drawings, the guide handed me a flashlight and told me that for the next half of the tour, I was to explore the cave alone. At first I was nervous for him to leave me inside the huge dark caverns alone–well, not alone; I had hundreds of bat friends everywhere! I took the dim (almost dead) flashlight and soldiered forth, exploring some narrow passage ways on my own. The bats were more plentiful the deeper I went into the cave. 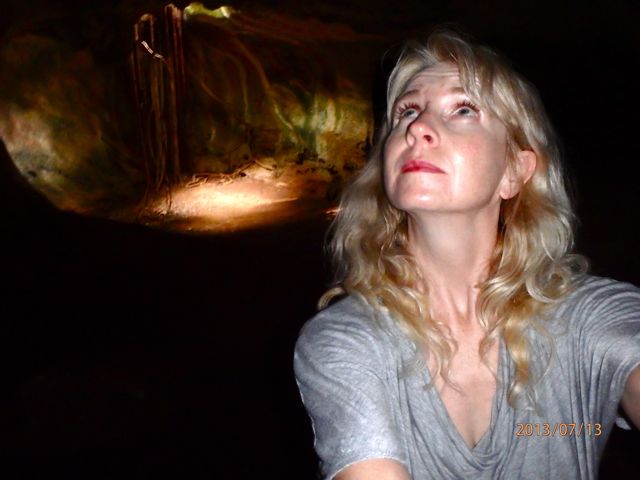 In the above selfie, there were many bats, very near by, along the darker coves on the cave, screeching to me. I suddenly became aware, once again, of my pathetic flip-flops as I squelched along the rough rock floor, over piles of bat poop. The guide had long disappeared–left the cave I suppose–just as I realized how easily one becomes disoriented in a cave. What I thought was the passage that lead to the main cave drawings, was another passage. Luckily for me the cave wasn’t too huge and it took me only a few moments to retrace my steps and find the right cave corridor that would ultimately lead to the cave entrance. 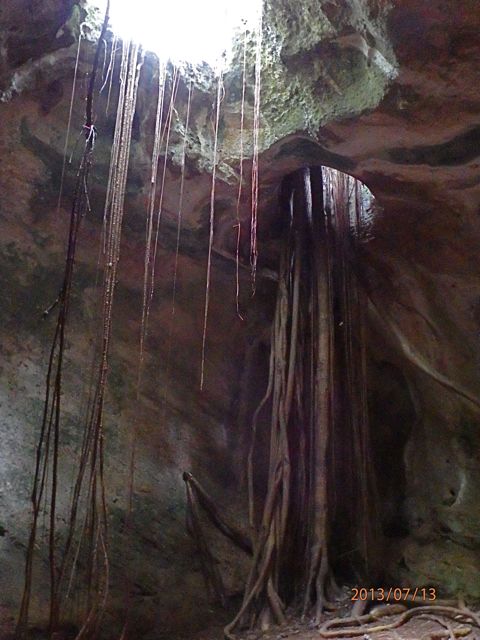 *Note for any eco-adventurists wanting to visit Cuba. Cueve de Ambrosio (Ambrosio Cave) and the bats are currently being scientifically studied and one can volunteer to be a part of the team.