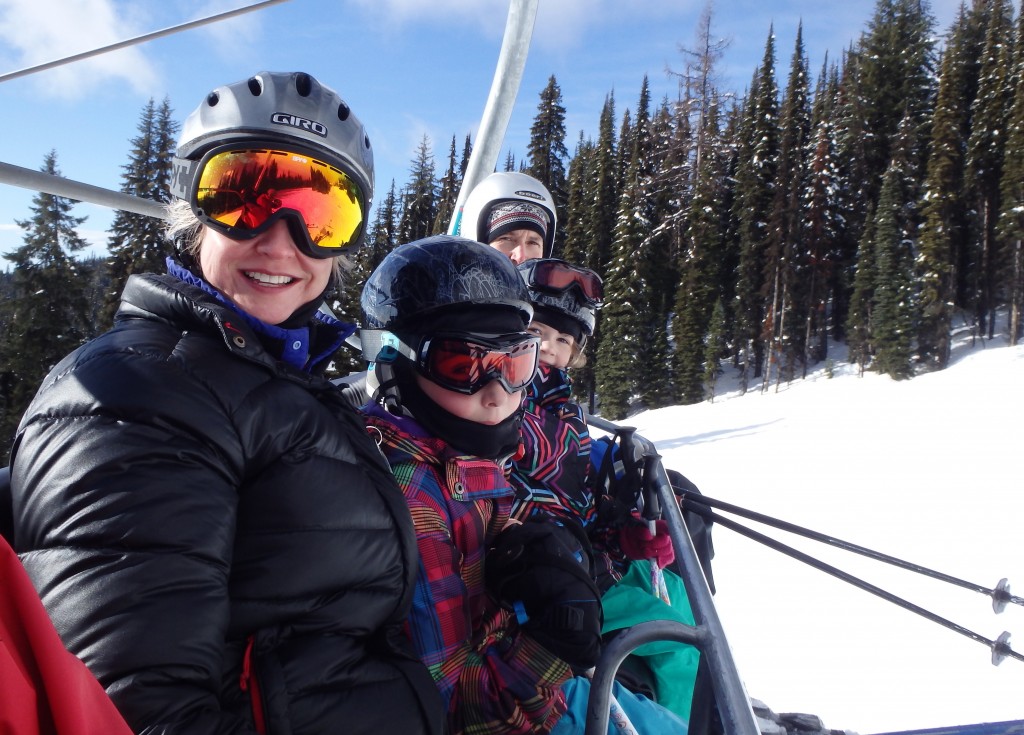 Me, Artemis, Pip and Peter–yesterday at SilverStar Mountain, BC

We went spring skiing this weekend. The mountains have a lot of snow but it’s slushy. I accidentally chose an  ungroomed run for our first run–it was like skiing through a foot of mud. The little girls loved the challenge though–an amazing leg workout for me too.

Sunday was like a family reunion on the mountain. My nephew and niece skied with Mist and Tabs and Peter and I skied with the little gals: Pip and Artemisia (my niece).

I must say, I love skiing with little kids because they are adorable on skis: their little conversations with each other, the interesting paths they choose to take to navigate down the slope and the challenges they give themselves (little jumps). I love skiing with my wee gals.

On the last morning run before heading to the village for a short break, we ran into trouble. We were almost at the village, near the base of a blue run when out of the corner of my eye I saw Pippi suddenly jerk toward the sky–air born in her skis. She then tumbled forward in a full circle: her head hit the ground first and her feet (with skis attached) were in the sky. The force and momentum in which she hit the ground caused her to bounce up again and she tumbled in the air another full circle and banged her head again on the way down. She then rolled until finally lying still in a crumpled heap.

It was a mother’s worst skiing nightmare. Thank-God she was conscious. She was screaming that her stomach hurt. Just then, Peter arrived (he was skiing a little behind us). I was terrified she might have a serious head injury. I told Peter to quickly call ski patrol to take her down the mountain. He said it would take too long and he could carry her in his arms. He scooped up Pip and skied down the mountain with her. I grabbed her poles and Artemis and I followed. Once we reached the village, Pip said she was able to stand and that only her head and stomach hurt. We took her to the hill’s medi-centre.

It was a miracle. Her only injury was a mild concussion. We are so blessed. Her fall was unbelievable: air born, head over heels, her head smacking the ground with each tumble–I thought she’d broken her neck. I have never seen anyone fall like that on the ski hill; I’ve seen falls that have broken legs, even a stranger slam into a tree and lose consciousness (this was in the day before cell phones–I skied like lightning to the bottom to get ski patrol help), but nothing like Pip’s tumble: air born skis in the sky and head hitting the ground over and over again… it was horrifying to watch as it seemed to be happening in slow motion yet I could do nothing but watch as I skied toward her, waiting for her to stop tumbling.

We don’t know what caused the fall; her skis seemed to stop suddenly mid ski and she was airborne. I guess the snow stickiness might have contributed to the fall is some way but even Pip doesn’t know how it happened; she was skiing average speed and the slope was a blue run but the area where she tumbled was near the bottom and more green run than blue.

Sometimes the days you fear could be the worst days of your life, turn into the best days, my baby girl is okay.