I think when a surfer becomes a surfer, it’s almost like an obligation to be an environmentalist at the same time.

For me, it’s the opposite: I’m an environmentalist who feels it’s almost like an obligation to be to surfer at the same time.

Above picture taken in the evening at Long Beach, Tofino, BC

Standing in the cool morning mist, at Cox Bay, near Tofino, BC, looking out at the grey sky and the grey/green waves as they crash on to the  shore, the last thing I want to do is grab a surf board and plunge my body into the cold Pacific Ocean water.

Yet, I travelled a long way from my mainland, interior of BC hometown, to do just that. I’m dressed for the adventure—a wet suit of 5•4 thickness to keep hypothermia at bay. Apparently, one lasts about 10 minutes in the ocean (in the summer) without a wetsuit. After ten minutes without insulation, you’re just too cold to surf properly.

Surfing looks difficult and it is! I’m thankful for all the sports I do regularly: especially alpine skiing, weightlifting, yoga and dance—each one helped prepare my body for the strength and balance needed to get up on the long board.

The truth is that I’m not cold at all once I start surfing; it’s so much work and so exhilarating that I’m nice and warm inside my wetsuit!

I love surfing because it is extremely physically and mentally challenging and also because it is the ultimate nature sport—being out on the ocean all morning is amazing! The best thing about surfing is that it leaves one in a puddle of Zen for the remainder of the day. I’ve only ever experienced such relaxed bliss after deep meditation and surfing.

Surfing the North Pacific is shark attack free! Great white’s rarely come up past the southern tip of Vancouver Island and any rouge shark that’s lost its way will probably be eaten by an orca. However, we do have many big sharks off the coast of BC; but there has been zero reports of any attacks on humans in history—zero.

There were once 3,000-5,000 basking sharks in BC; however, in a heinous act of government shark genocide, the gentle giant was nearly wiped out by the federal government eradication program from 1945 to 1970. Ottawa steered vessels with sharp blades on the bow throughout the  BC coast to kill as many basking sharks as possible because they might “interfere” with commercial fishing nets. In BC, it seems any wild creature that gets in the way of government money, ends up dead. 1

The red cedar tree above is over 850 years old!

We were so Zen that the only thing we wanted to do after a morning of surfing was calm, old growth forest hikes.

If I ever come back as another creature in the next life, I want to be a seawolf. Imagine, getting the best of both worlds: old growth BC forests and the Pacific Ocean as my playgrounds! Though, even the elusive seawolves of BC’s coastal Islands are finding it tough to make a home amongst vanishing forests, polluted ocean and the huge summer influx of tourism on the Islands. 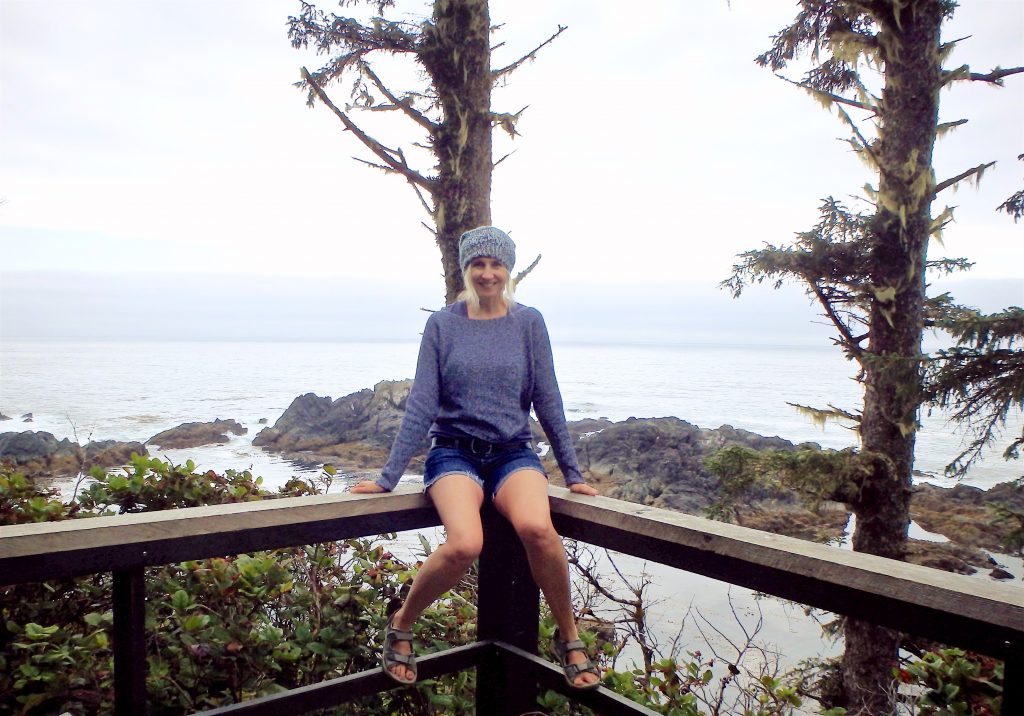 My surfing birthday weekend was just what I ordered: a Zen weekend with nothing but waves and forest–we tented at Surf Junction campground near Ucluelet, BC (it has a hot tub which makes after-surf time so nice) and surfed in the day. BTW, Tacofino really is delicious and almost worth the 1h wait in line to get a birthday burrito!

Below: feeling Zen on Long Beach, BC.

Below: dreamy hike near Ucluelet, BC