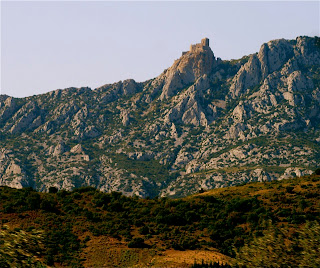 We left Spain for a night in Perpignon, France. But alas, on our arrival we found Perpignon to be the most annoying city we’ve ever been to. There was absolutely NO WHERE to park the small black rental car. We parked it right on the sidewalk for a moment to check out Hotel France and discovered Hotel France had no parking so we’d be unable to stay there unless we found our own–impossible. So we decided to find a Wi-Fi cafe to at least research where to stay or at the very least how to exit Perpignon and move on to another town–again impossible! We drove around that hot, busy city in circles for 2 hours until we decided just to try and find our way out ourselves and head to destination unknown. Low and behold a Wi Fi sign and guess where? At a McDonalds of all places! Saved in France by Rotten Ronnie’s. It was a blessing. We got on the net and plotted our course to the Pyrenees to see a Cathare Castle.  And so our adventure begins…

The hot dry Mediterranean grass and shrub covered hills turned into high green mountains and a lush valley full of vineyard after vineyard. The highway turned into a narrow road with no traffic. We rolled down the windows and drove in awe through he most beautiful, quiet French valley. The only sound was the very loud hum of a leg rubbing insect.
And then, to our utter amazement, high in the craggy mountain tops we spotted what we thought looked like a castle. Impossible! How could anyone build a castle at that craggy elevation? It turned out to be our first Cathare Castle: Queribus. It took super narrow, cliff lined mountain roads to climb up to it. I was terrified, if one met traffic, it was touch and go as to whether or not we’d be bumped off of the cliff.
Climbing to the Castle in the evening sun was one of the most amazing life experiences I have ever had. It was thrilling, beautiful and terrifying all at once. Peter and I could not believe our eyes or our feet. It truly was a slice of heaven on earth. Once we reached the castle, the steps up were at times sloped and slippery. We climbed down long, dark and narrow castle corridors, up spiral staircases into the tower and were completely awe struck by the unbelievable views of the French Pyrenees and lush valley below.

The Cathare Castles are from the tenth-eleven Century. They were refuge for a Christian religious group that did not follow Catholicism–the Cathares or Albigense. The Pope (Innocent III) viewed them as the greatest threat to the church and in 1208, he began Europe’s greatest army against them–the Crusades. [The Cathares were vegetarian, abstained from carnal pleasures, practiced total indeference to material possessions and believed in reincarnation ( a little bit Buddhist if you ask me)]. The last known Cathare was burned alive in 1321.

Enjoy our journey as we discover Queribus Castle, near the French town of Cucugnan.

*Castle Queribus is first mentioned in 1020 in the Count of Besalu’s testament. Queribus was the last Cathare stronghold to fall to the French crusades in 1258. 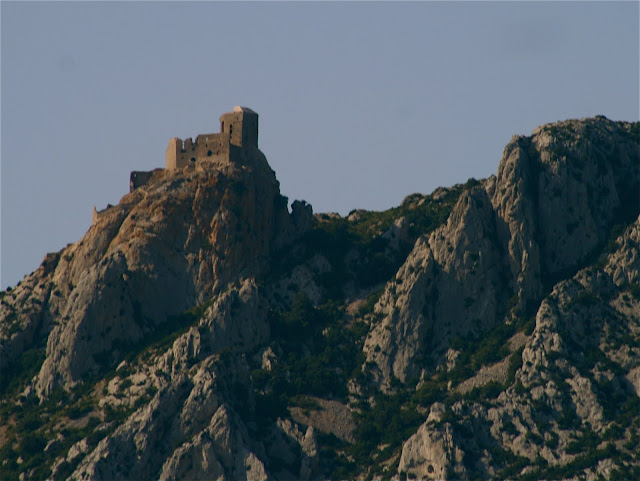 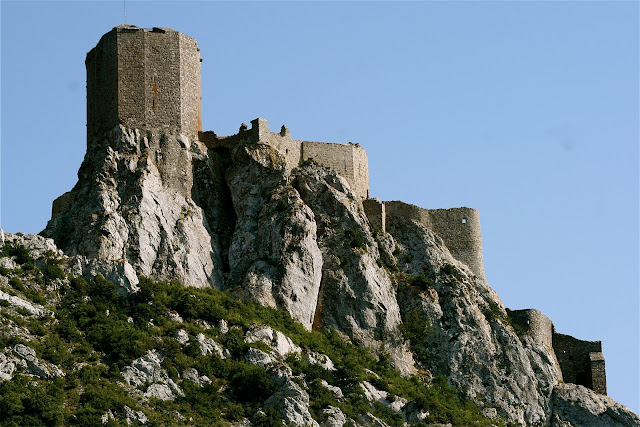 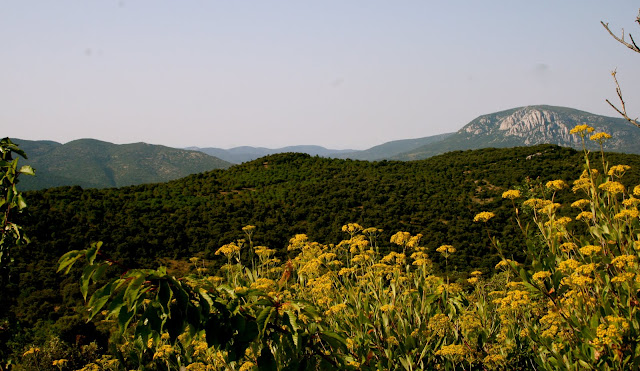 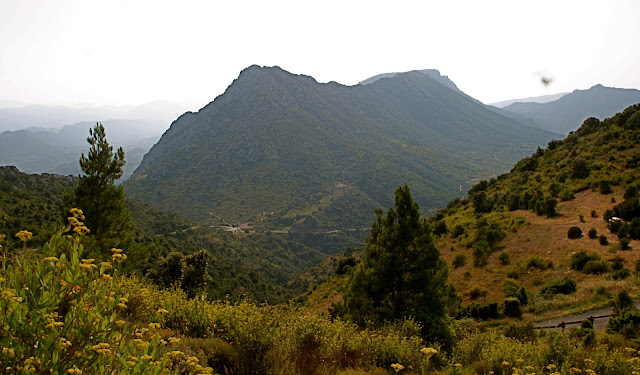 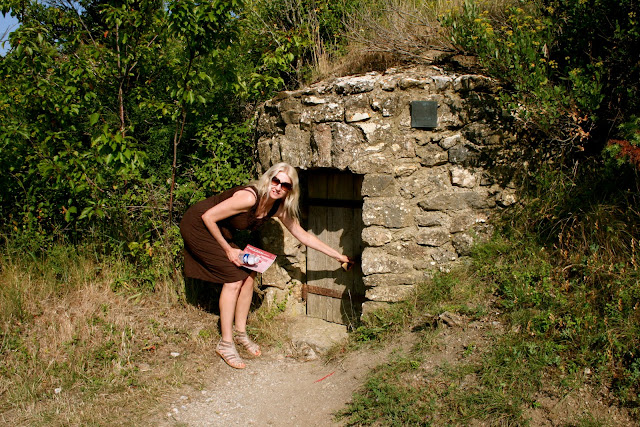 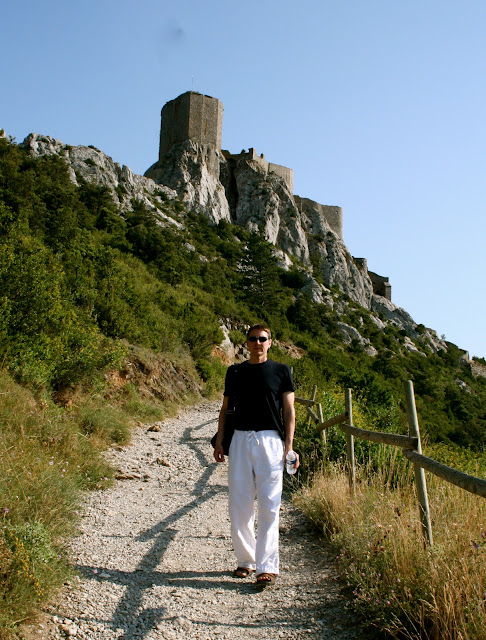 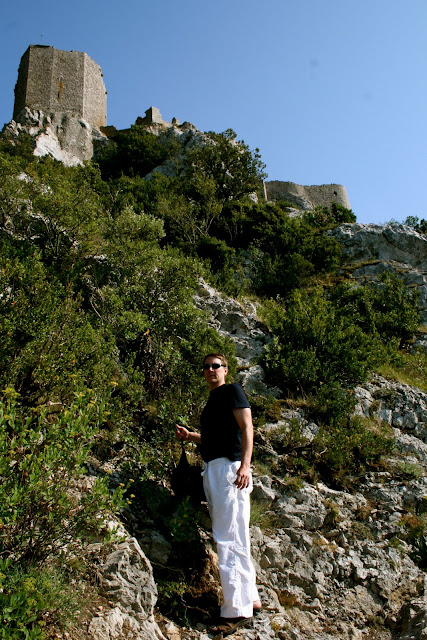 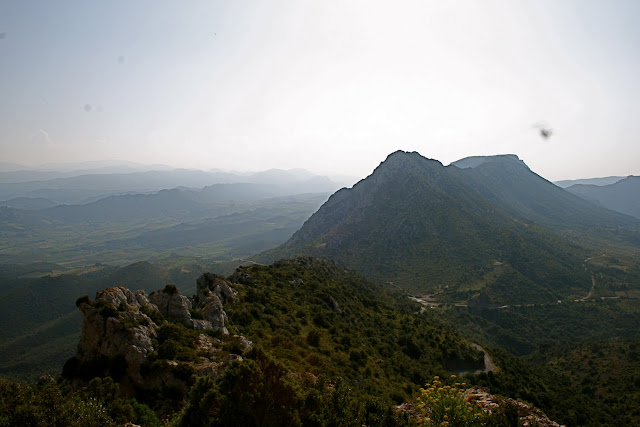 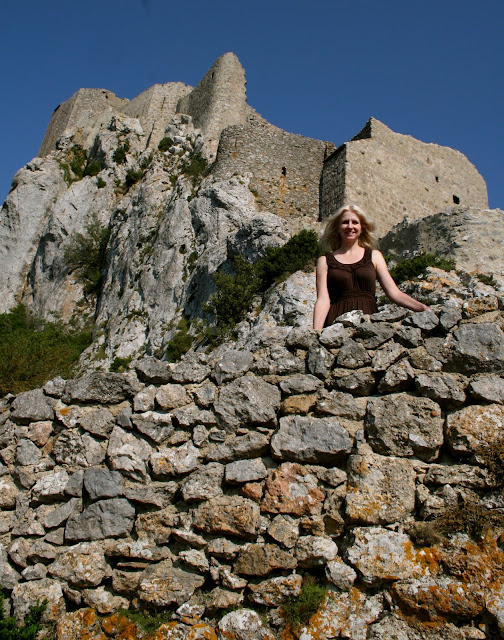 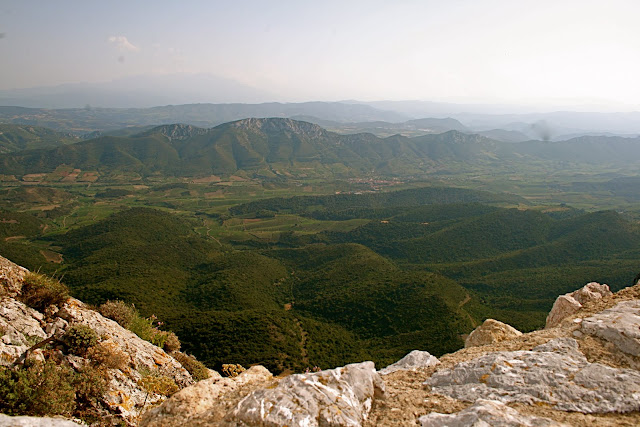 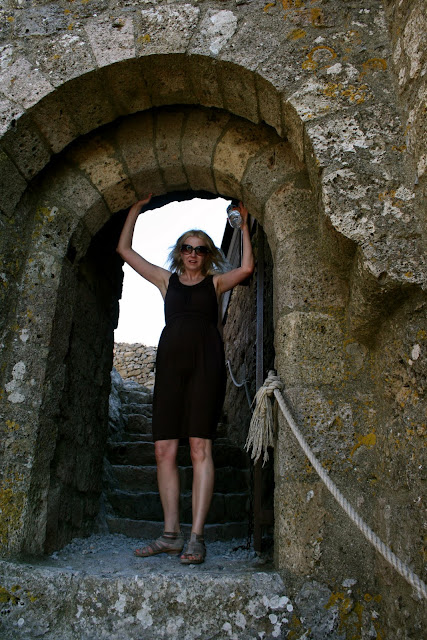 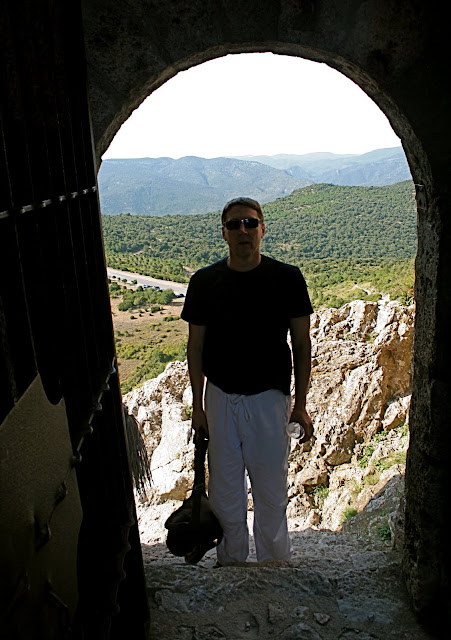 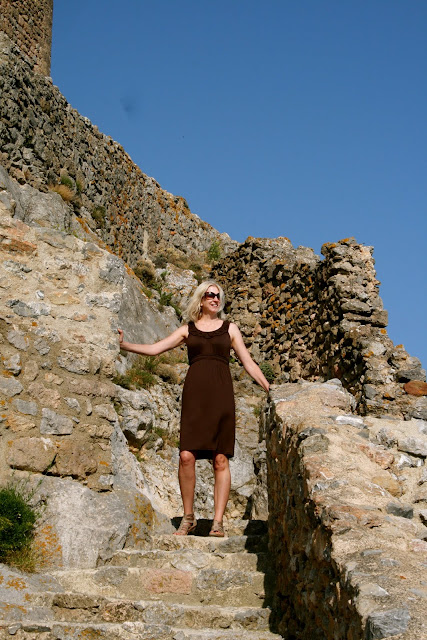 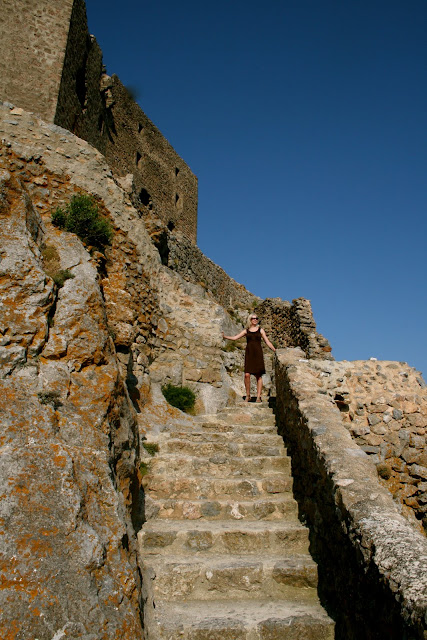 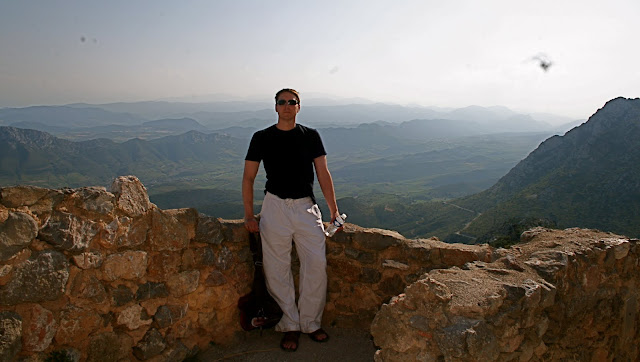 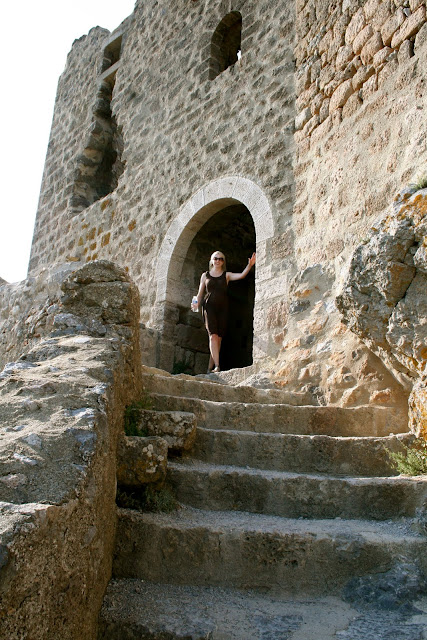 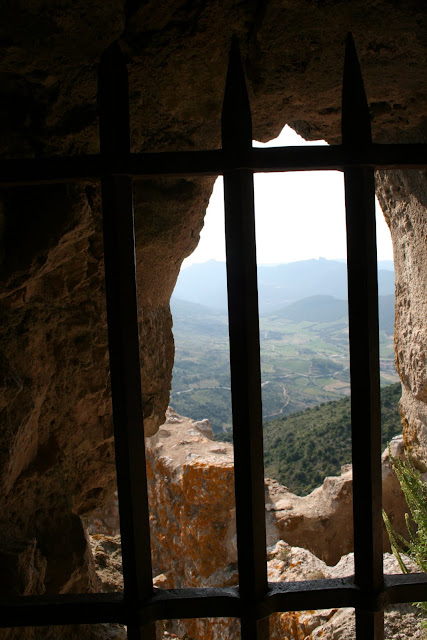 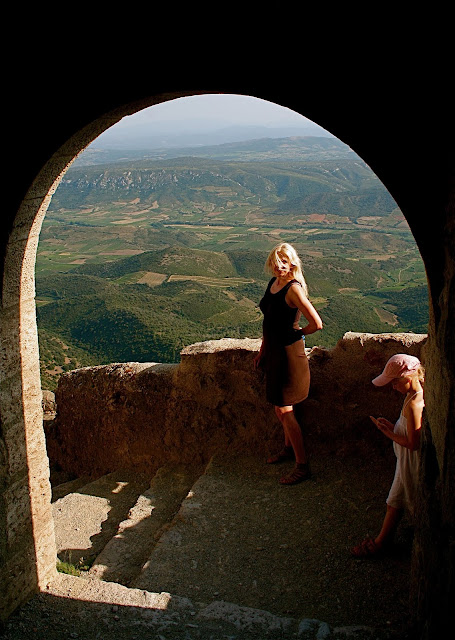 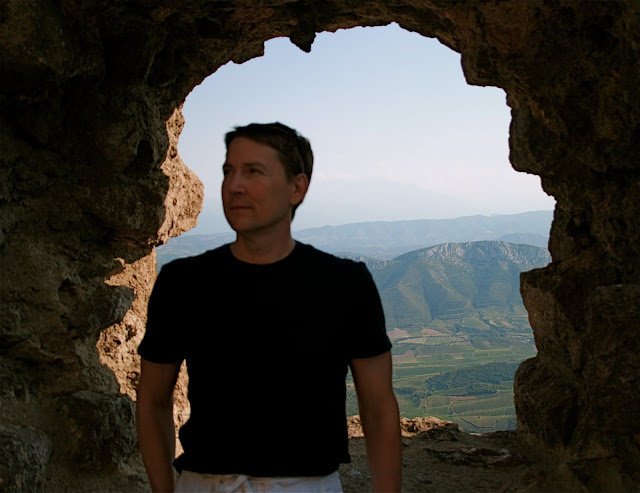 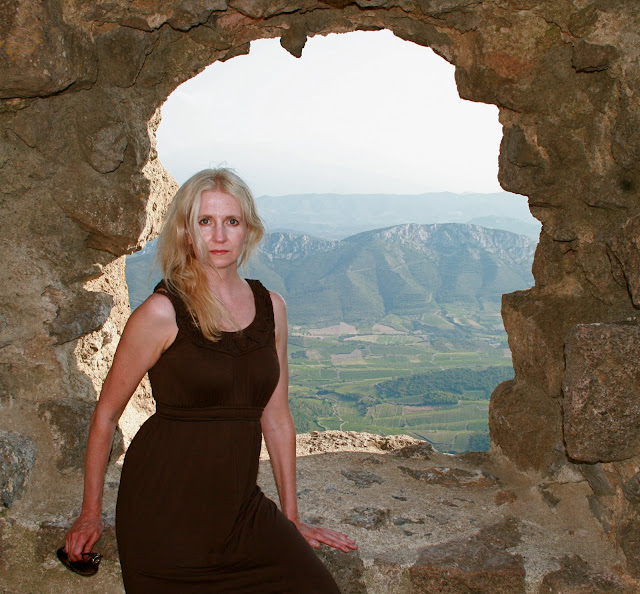 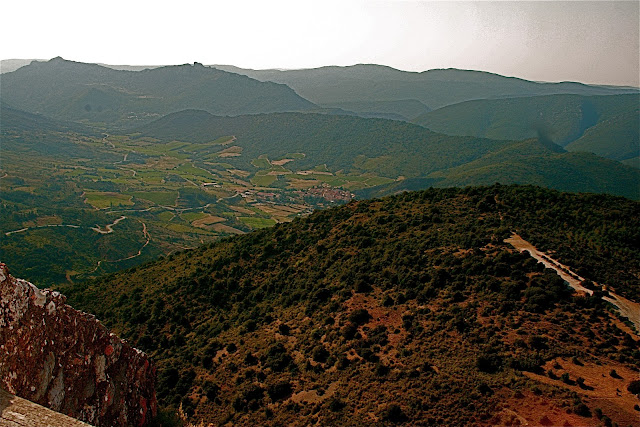 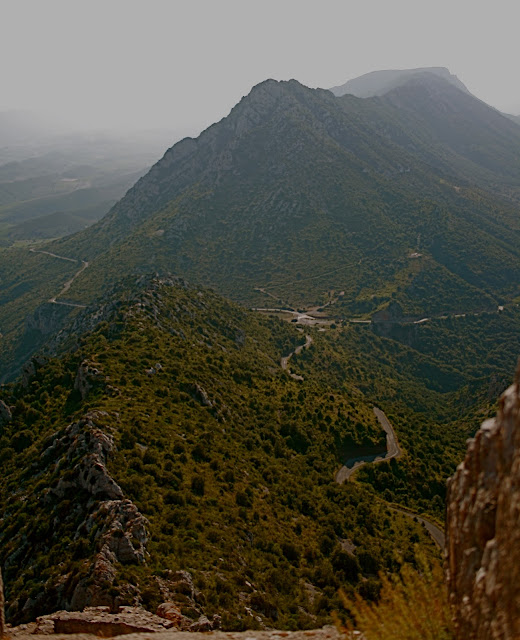