We have arrived after 30 hours in transit to our Jungle vacation home at Sierpe del Pacifico. This is the second blog post so far about my family’s jungle adventures on the Osa Peninsula in Costa Rica. You can read about our first day here: Jungle Adventure!

No plane, no train, no motor car, not a single luxury. Like Swiss family Robinson, as primitive as can be…

Well, the truth is no cell phone coverage (except to the town of Sierpe), no internet, no TV, no motorcar and no boat unless we prearrange for pickup a day prior. We do have electricity (solar-powered), running water and a stunning plantation style jungle house. 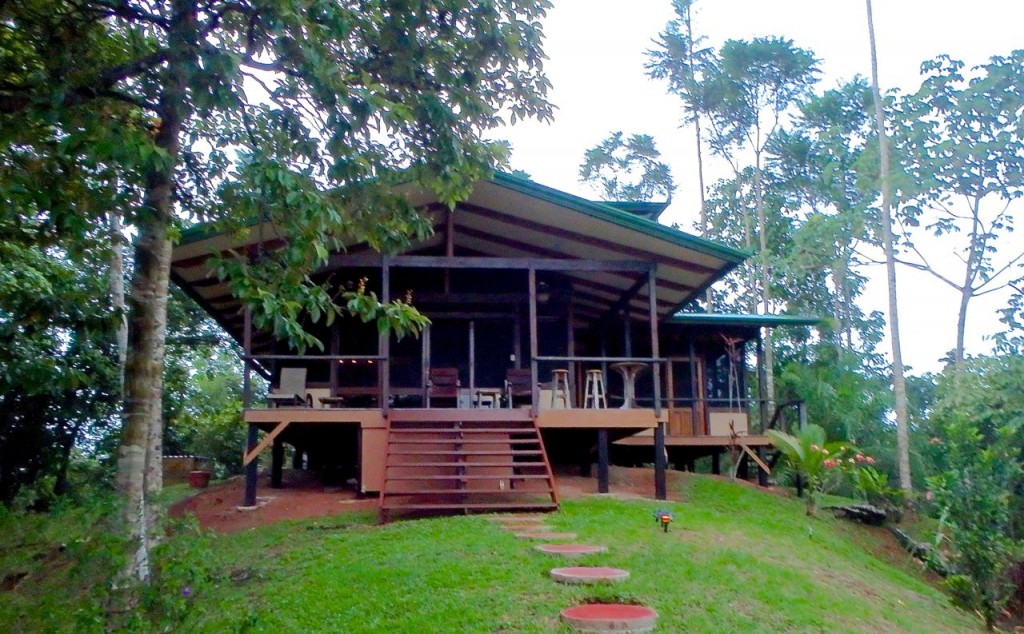 The house is beautiful with gleaming jungle hardwoods and screens surrounding all four wall (no glass windows). We are open for jungle business of all sorts. The house temperature is identical in humidity and warmth to the jungle air. There are many ceiling fans that create a welcome breeze on our sweaty bodies. We have arrived at the very start of wet season and thus a much-needed afternoon thunderstorm cools things off for a wee bit.

We have a gas stove and a small refrigerator/ freezer. Unfortunately, it smells strongly of recent fish storage and thus we cannot use the ice in our drinks (one luxury I really miss is ice-cold drinks). For our first supper in the jungle, I prepare a stir fry and rice on the gas stove. I love cooking with gas, nothing burns! The chicken is unlike anything I’ve had in Canada. It is flavourful and delicious. It make me shutter at the thought of Canadian factory farming and the tasteless chickens they produce. Things are done on a small-scale in Costa Rica and the flavourfulness of their fruits and chicken reflect this.

It appears as though we are the only humans on the Sierpe del Pacifico peninsula at this time. The other 2 rental homes scattered throughout the jungle acres are vacant and all that surrounds us is miles and miles of jungle. It truly feels a little Swiss Family Robinson.

Sitting For a Spell On the Front Porch 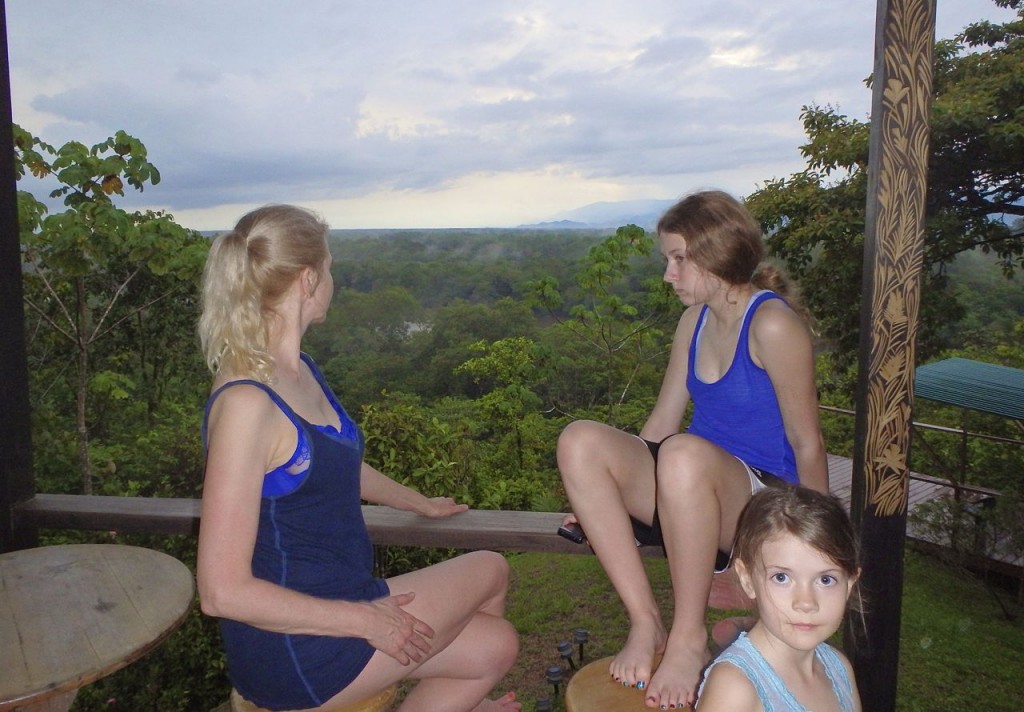 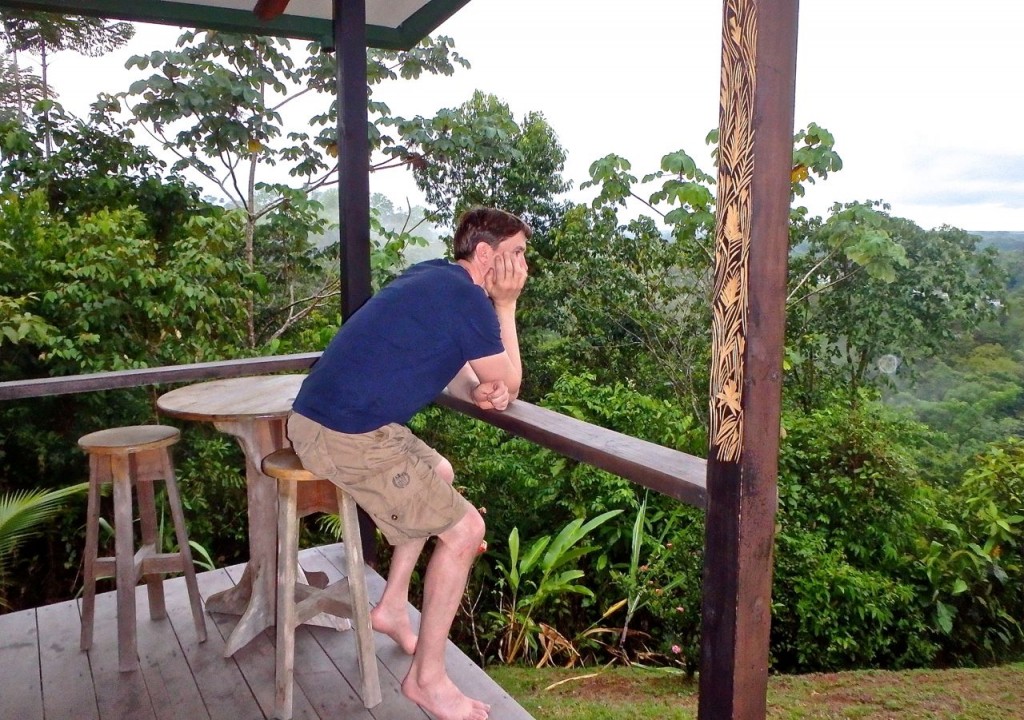 Bella Vistas From our Porch (the jungle and the Sierpe River below us). 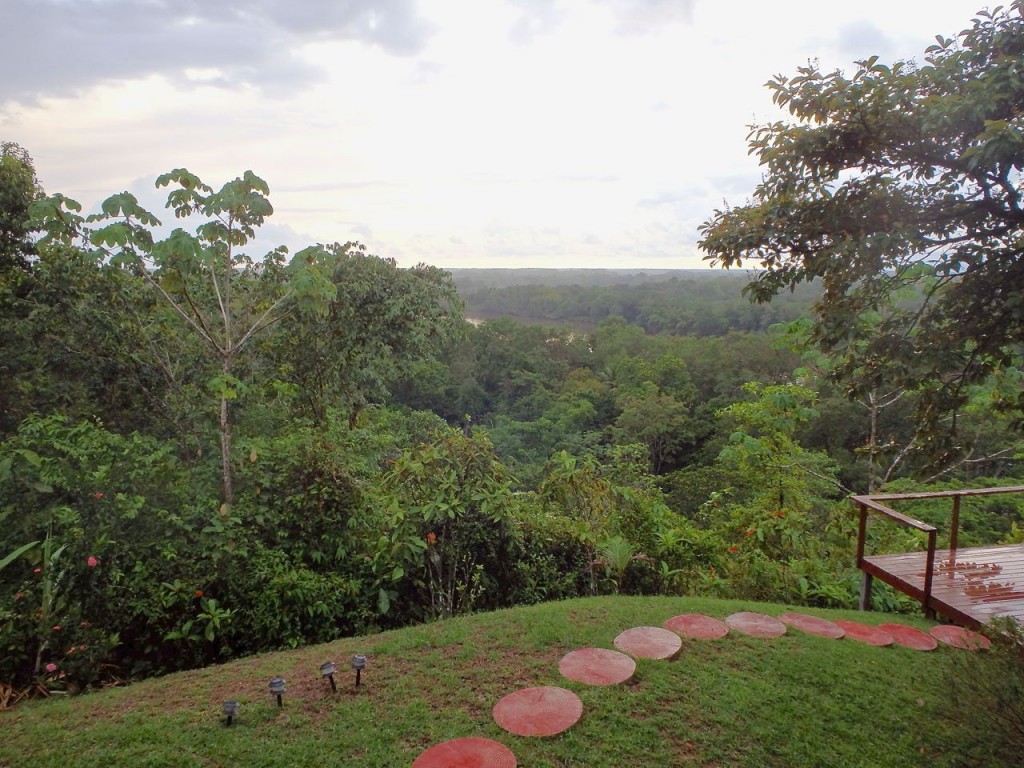 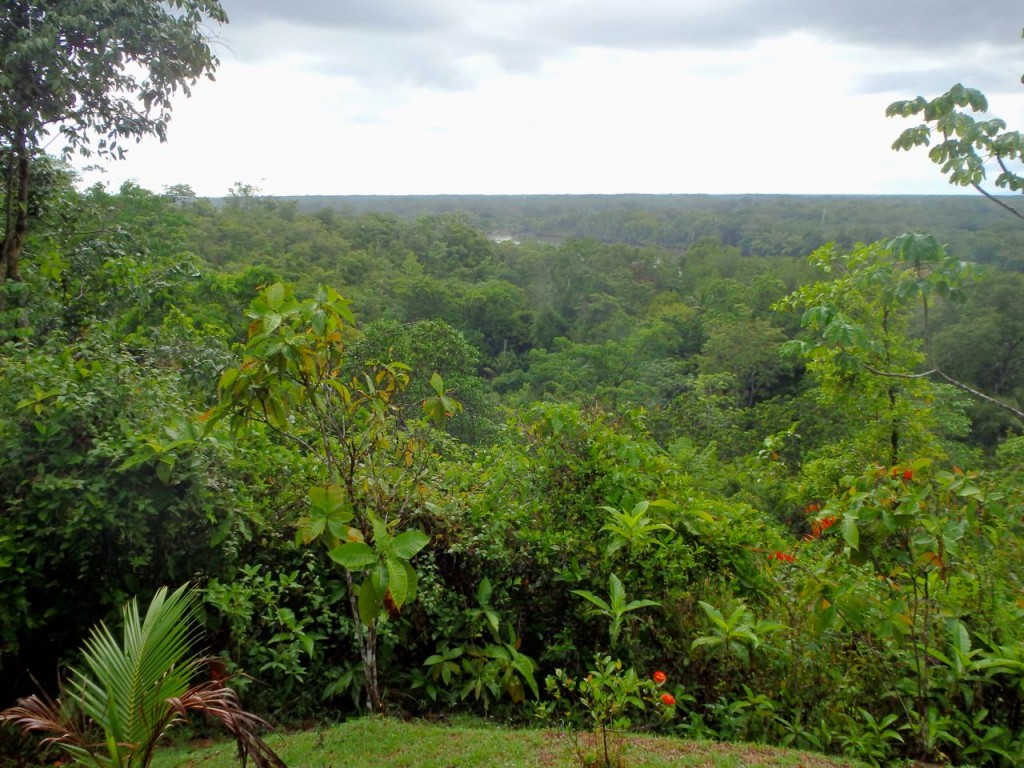 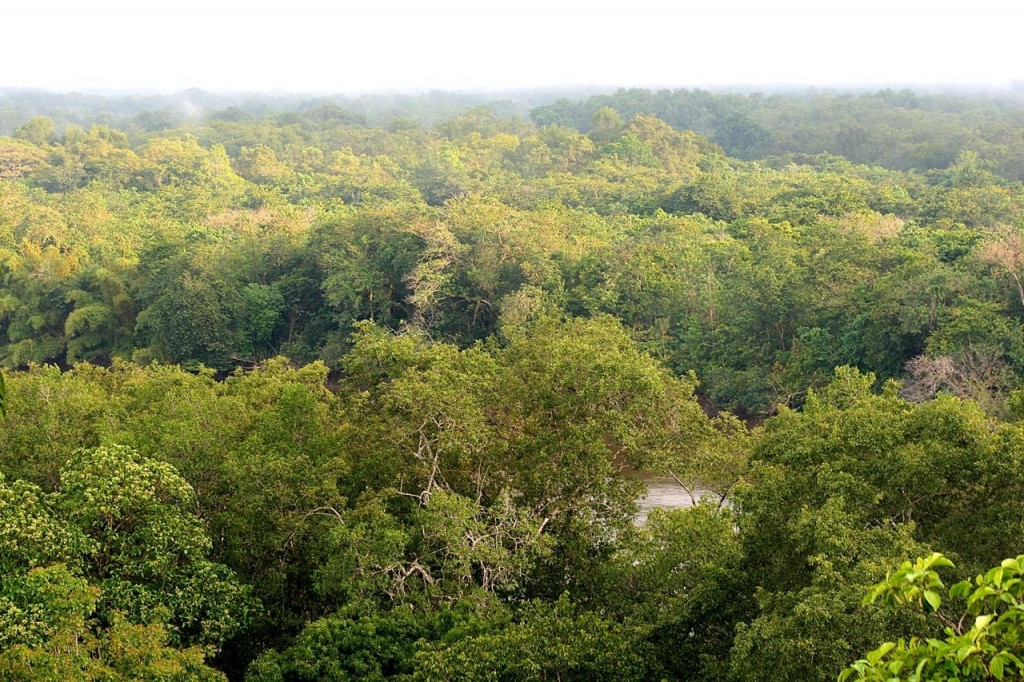 The jungle calls of birds, monkeys and insects keep us all guessing who exactly is out there and what are they saying? The fruit trees that surround the porch are visited constantly by the most colourful, exotic birds I have ever seen in the wild: toucans, aracaris…a pair of scarlet macaws fly past but don’t land so I cannot snap a pic. Flocks of small green parrots are the noisiest of the birds. The loud chatter of squawks let me know they’re over head. A giant pair of green parrots fly overhead and rest high on top of a tree in the Sierpe Valley below our home.

My jungle fashion sense takes an immediate nose dive. The only way to cool down is to take many cool showers throughout the day and let the water evaporate off my naked body. My daily house uniform has become underpants and a tank top, even a bra feels too hot. Peter’s taken to wearing his boxers at all hours of the day and Pip’s quite comfortable to slip on only a pair of panties for the day. In between my snazzy underpants outfits I am periodically nude as I allow my daily showers to evaporate off my body. Our teenage daughters ( Mist and Tabs) don’t approve of our scant wardrobe choices. I shout upstairs, “If you don’t like nudity and underwear, you need not frequent the main floor!”

The night comes early. By six o’clock it is jungle dark.The house is solar-powered and we don’t want to blow the generator. We must be careful to only have one or two fans and lights on at a time. After yet another cold shower, I sleep in what ever t-shirt doesn’t have Deet on it. 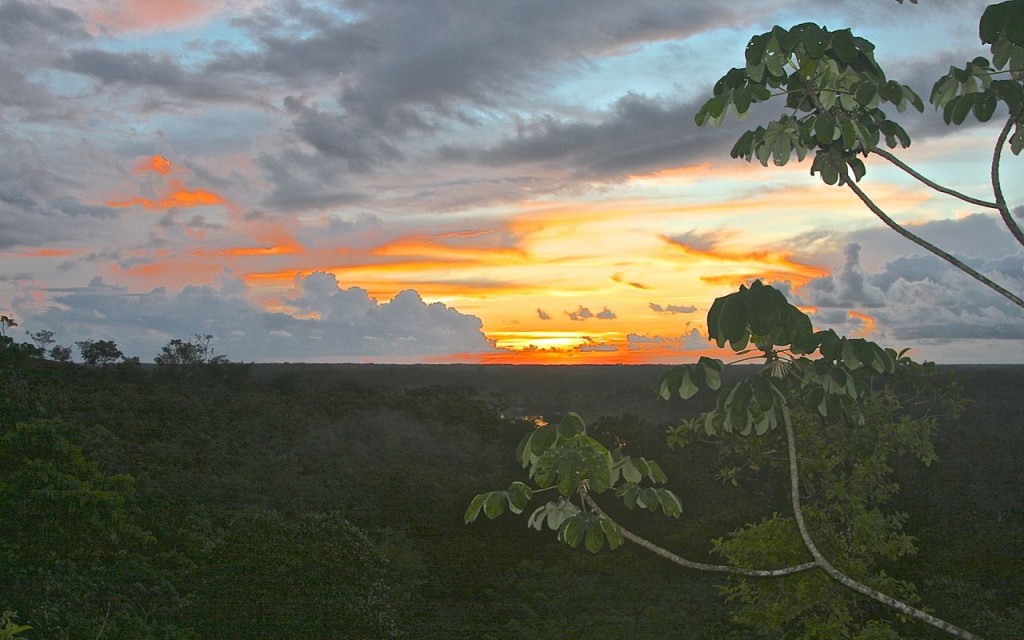 The jungle never sleeps. The creatures take turns resting in rotations while the other creatures chatter away. I realize in the urban world we barricade ourselves in silent homes with locked doors and windows, shutting out the night. You haven’t truly lived until you experience a jungle night, raw and wild. Jungle calls are louder at night, it seems the most vocal of the creatures are nocturnal. Peter and I attempt to sleep in the main floor bedroom in the queen bed.

We quickly realize that at Sierpe del Pacifico, we are full on participants of the jungle night.

The screen walls of our bedroom are surrounded by a walk around porch outside. The only thing separating us from the wild is a thin screen…easily jumped through or torn through by any creature who wants to come in…much like sleeping in a tent in the Central American jungle. The rational side of my brain knows that jungle creatures fear humans and choose to stay away, yet my Canadian culture-shocked self finds it hard to sleep knowing anything could be walking on the outside porch and staring in at me through the thin screen.

I sit with my fear for a little while and suddenly I get it: give me snakes and jaguars any day; the truth is that it’s never been wilderness that I fear, but humans. A rouge human in the jungle is what I fear. However, in truth, we do not possess any thing desirable enough for a human to brave a long boat ride at night and a ten minute climb through the jungle to get to us. I have been fooled by the naive trust I have in the artificial barricades we create for ourselves in our silent city homes with locked windows and doors. My fears are jungle culture shock and not reality.

It’s too hot to sleep with anything but a sheet and even that is clammy with jungle humidity. The girls upstairs in the king bed cannot sleep either. The jungle is too noisy. They are in culture shock too. They want Peter and I to sleep upstairs with them. You’ve never seen Peter agree to an idea so fast. He is the first one to jump out of bed and sprint up the winding staircase. And so it goes that all five of us culture-shocked Canadian cowards sleep upstairs in the giant treehouse-like screened bedroom–the 3 girls in the king bed and Peter and I on the double futon. How is it I always end up on the most uncomfortable bed?

Immediately, I relax a wee bit. It feels better to all sleep together up here, more natural.

We are human primates returning to our jungle roots of sleeping high in the trees for safety.

The tops of jungle trees sway with life and night callers through our treehouse screened windows. We truly are sleeping in the jungle tree tops tonight.

I took this video through the screen in our living room at 4 a.m. Imagine the sound more than 10x louder and coming from directly outside the bedroom window; this is what howler monkeys in the morning sound like.

4 a.m. I am dreaming. A loud, earth trembling roar awakens me. The roar is so close, coming from just outside the bedroom screen window in front of my bed. “Is that a jaguar?” I whisper. Everyone is awake. It is a sound like nothing I have ever heard before.

King Kong in beating his massive chest outside the house and is about to rip the place apart with his huge hands.

Several deep and low “hoop-hoop” sounds (like a jaguar coughing) are soon followed by a tremendous roar. The same roar, a little further away answers the beast in the trees outside our window. “Howler Monkeys,” Tabs whispers. Howler monkeys are the loudest terrestrial animals on earth (blue whales are the loudest oceanic creatures). I am humbled by their calls. This is their home, their territory and we are honoured to live amongst them for a short while. 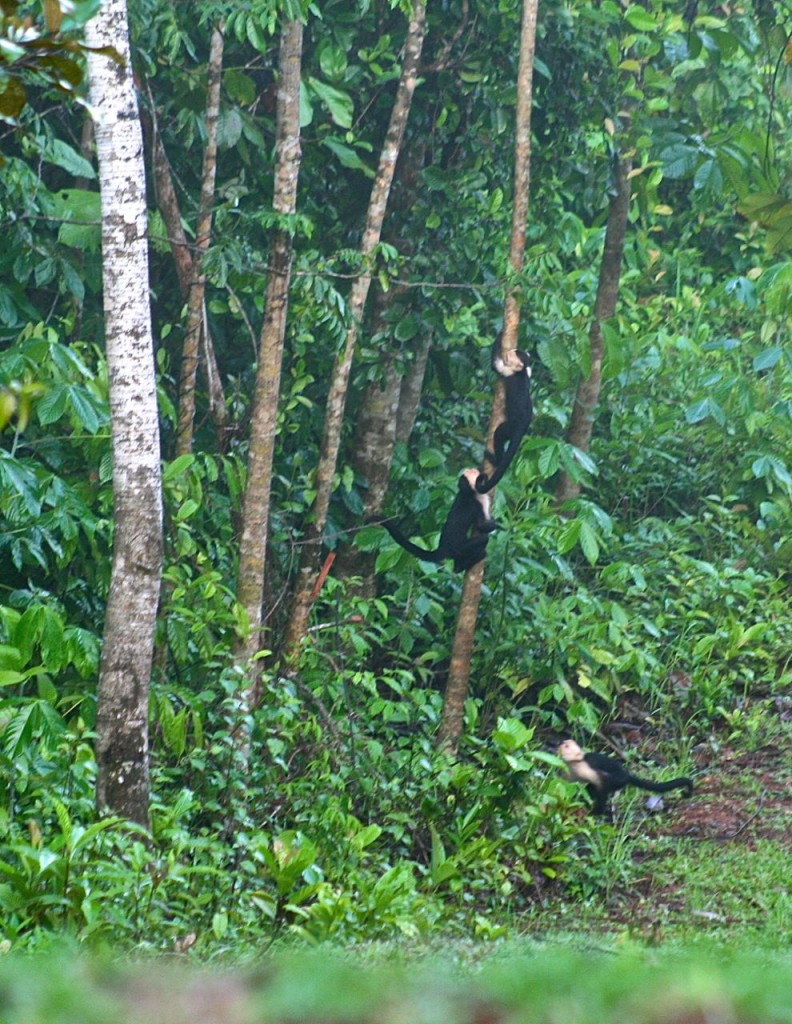 Capuchins crossing a trail by foot and climbing a tree. They are very nervous on the ground and dart across very cautiously.

The howler monkeys have spoken, the morning has officially begun at 4 a.m. for all of us. Shortly after 5 the sun begins to rise. In the light of day it immediately becomes apparent that we are the first humans in the area for a while. An entire tribe of Capuchin monkeys creep over our heads as we lie in bed. Tabitha counts 18 and three have babies on their backs. They want to check out their new neighbors. I am sure we are a disappointment. Primates view other primate species as competition for resources and we humans are the greediest and most destructive of all primates to date.

The natural beauty, pristine jungle air and wild animal neighbours is true bliss beyond comprehension. After a brief culture shock, my mind quiets and I drift into the realization that I am home. 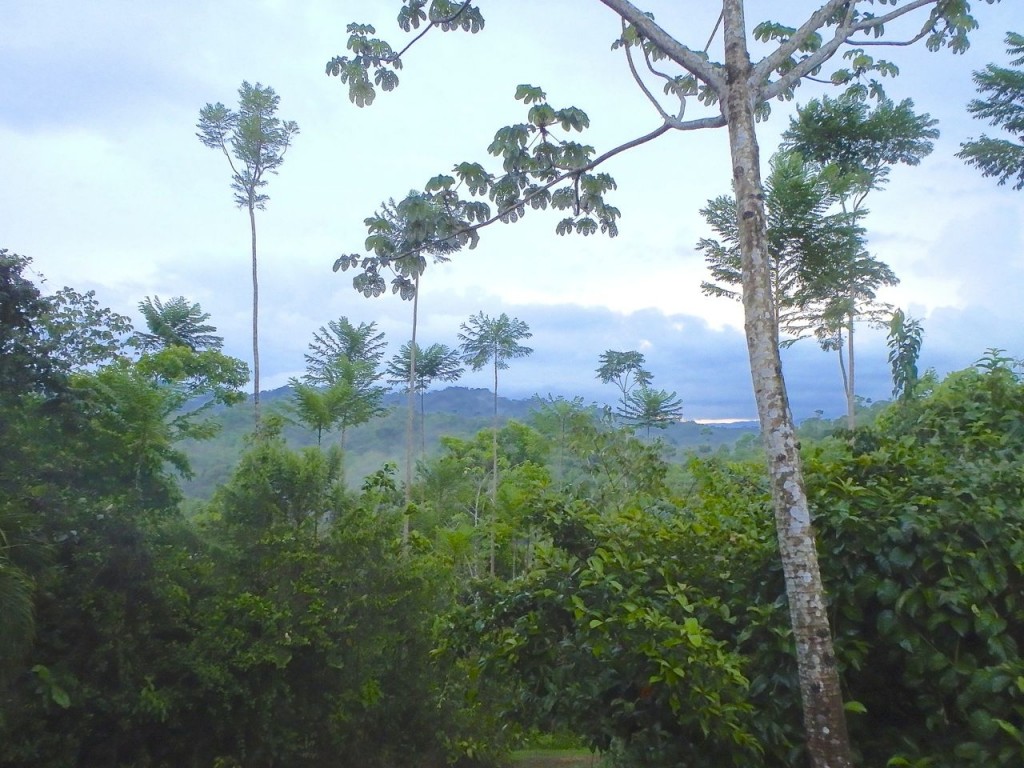 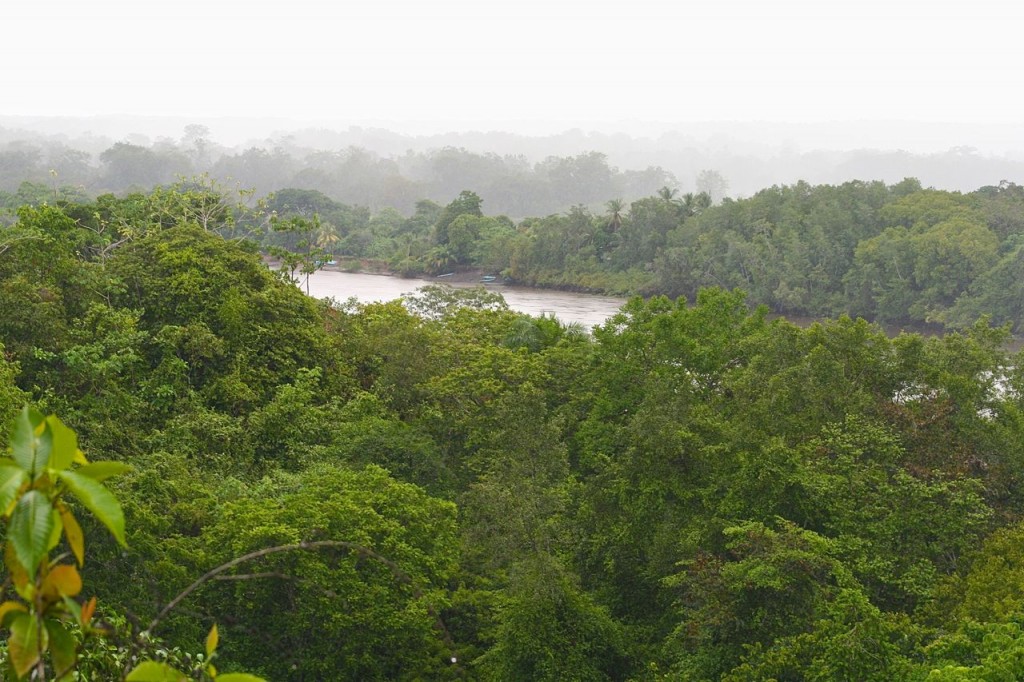