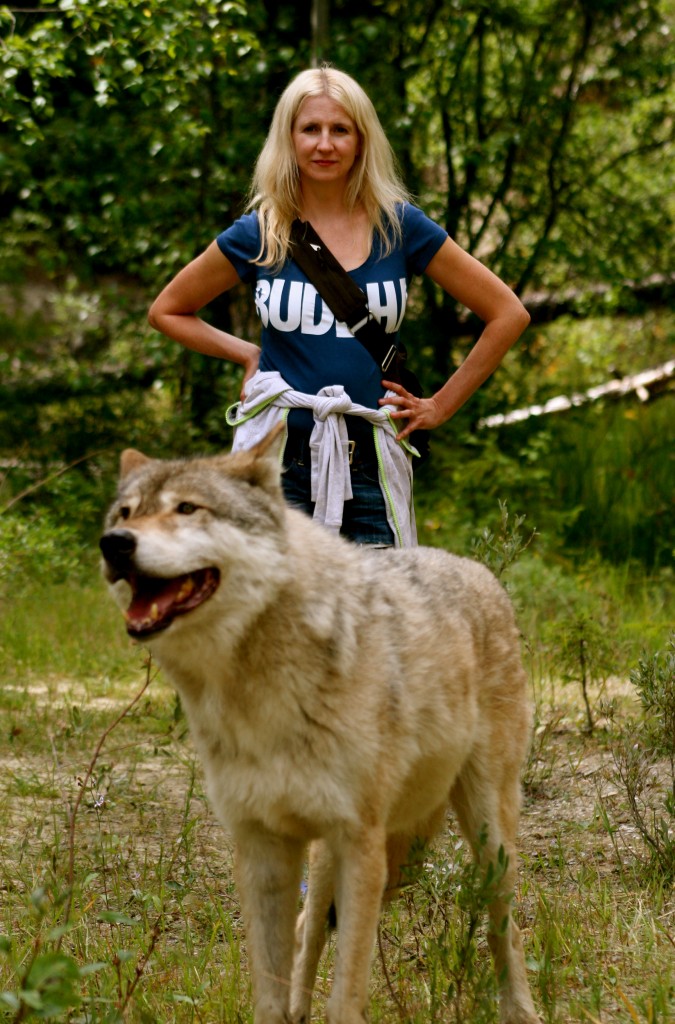 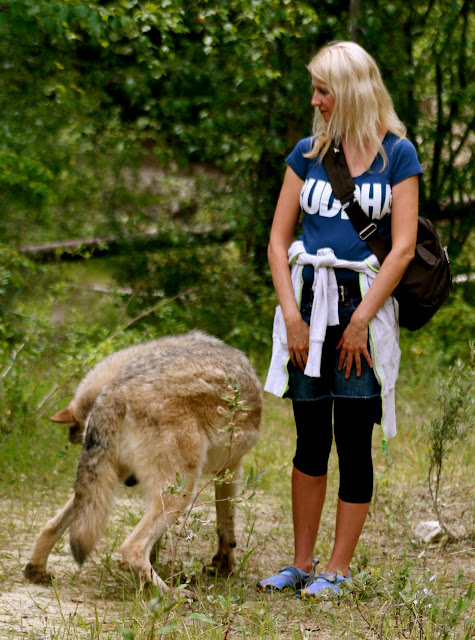 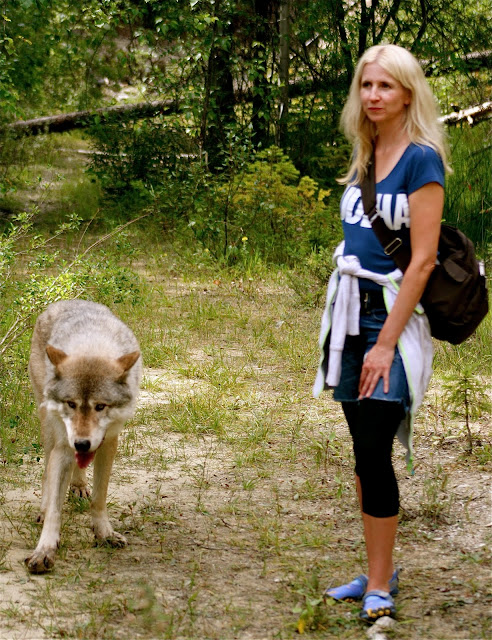 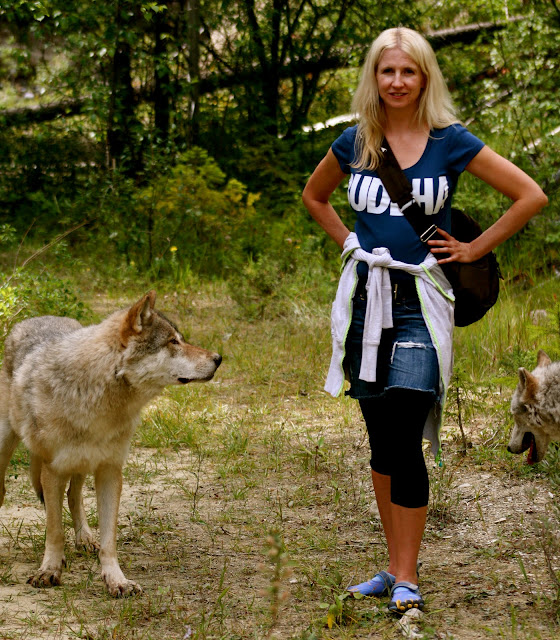 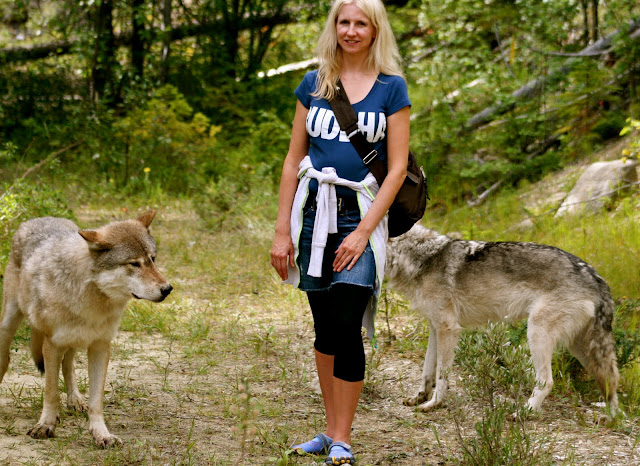 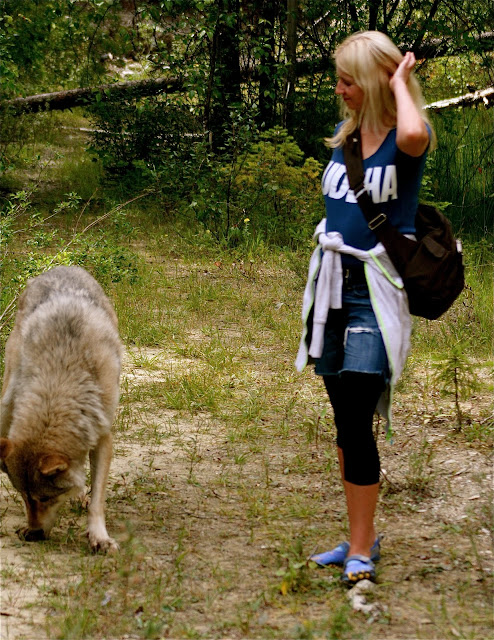 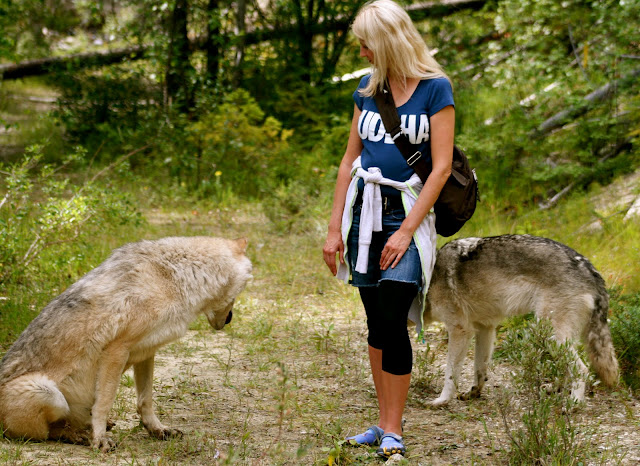 What a wild weekend. Who knew what adventures awaited me amongst the glaciers of the Columbia Mountain range. I have been having the most wondrous life it seems. It is all amazing to me. It is also terrifying and difficult but so beautiful and exciting.

I will start with our second stop along our weekend road trip east towards the Rocky Mountains. The first stop early Saturday morn was to procure a camp site in Glacier National Park at Illecillewaet camp ground. We found the most picturesque tent site right beside a fresh glacier fed river–with a view of the glacier that fed it! The river was spectacularly rough with huge rapids. Thus, the sound of the rushing river drowned out any and all sounds for us–falling asleep to such a loud river was an unusual experience–but our campground adventure will take several more blogs to discuss.

I will stick to our second stop, just west of Golden, BC–The Northern Lights Wolf Centre. I had booked myself in to hike in the mountain wilderness (crown land) with two wolves and their two handlers. I lucked out–I was the sole hiker signed up for Saturday afternoon. It was an amazing trip. We hiked with a large male and a smaller female grey wolf.

At first I thought I might find the wolves just like large dogs–I was raised with a giant Bouvier Des Flanders as a child and adored him like a brother. But it was soon very apparent to me that wolves are not dogs. Not dogs at all. Wolves can’t bark. Wolves howl and wolves growl–a deep-throat growl that sounds like a very big cat (lion or tiger). Wolves feet are big. There is no way  that a wolf foot is a dog foot. The feet are unmistakably wolf.
Wolf packs have been documented as large as containing 36 members. The alpha male and female are the head of the pack and the only breeding pair. All of the wolves in their pack are their descendants. Also, all wolves in the pack help raise the puppies.

The handlers “safety” talk was the first thing to take me by surprise and send a wee shiver down my unsuspecting spine. If the male sniffed my butt/crotch I was to place my hands in front. say ‘NO!’ sternly and turn to the side. I was not to turn all the way around. I was never to crouch down. It still sounded pretty basic, but still, I was a tad nervous: crouching down made me appear like prey.

We traveled by truck into the wilderness, just myself, and the woman handler. Her husband and the wolves led in their own truck.

I was relieved when the wolves were first unloaded and we all started to hike on a trail. The wolves seemed relaxed and ignored us but kept very close to us. Wolves are not like dogs, they seldom bolt unless they find a strong intriguing scent–they like to stay close to the pack. I relaxed and started photographing them. It was a very hot day and the wolves and I were all hot. Their tongues hung out as they explored the trail and marked their territory.

The male stiffed at me a few times. I did as instructed, turning and sternly saying, “No!”. The handlers encouraged him to move on and become interested in something else. I was a little nervous by his interest but fine.

The wolves were beautiful creatures. The female especially seeming very gentle yet, more aloof than the male. She had intense eyes that always looked beyond the humans, as though we were of little interest to her. Most likely it was wolf pack etiquette.

Suddenly, the male seemed to take more interest in me again, sniffing and head butting me. I was stern but he was persistent. His handlers were stern and determined to make him loose interest in me. They instructed me to stand very still. He then grabbed my jacket in his teeth and pulled at it, doing one of his growls. His playful growl sounded like a lion–much deeper than any dog could imitate. The handlers were again very serious and stern, putting themselves physically between me and the wolf, encouraging him to move on to something else of interest. He was a very big wolf. His size was intimidating. Also, I had just read that their jaws have the pressure of 500 lbs per square inch.
Having my clothing grabbed and tugged on by a wolf was frightening, I cannot lie.

I learned much about wolves. Wolves are at the top of the food chain, they have no natural enemies. Wolves and humans are the 2 top mammals to populate the earth with equal force. Everywhere humans lived, so did wolves. But sadly, due to humans hunting, trapping, and refusing to share the earth with any other wild species, they are extinct in many parts of the world and near extinction in most. Why are there so many coyotes and deer invading our cities? No wolves left to control their populations. The wolf is the keystone to the survival of all species. If the wolves die, soon the natural balance is out of control and other species die soon after.
In Yellowstone Park, there were so many hoofed creatures living permanently by the water supplies that the riverbanks were eroding and no water birds could survive. It was because in nature, hoofed creatures never live by water-they are fair game for wolves. When wolves are gone, they have nothing to fear and never leave the fresh grass on the water’s edges. Reintroducing Canadian wolves to the park rectified this problem.

Most importantly for Canadians is the insane law in BC: year-round open season on shooting and trapping wolves. Why? Without wild wolves we have no wild creatures. They are the keystone mammals of our ecosystem. We must change this law to protect our wolves before they are extinct.

I found the experience unbelievable. I never dreamed I’d walk through the mountains with wolves beside me. I took 600 pictures. I cannot publish them yet as they are all for my art work (paintings) and I may sell some of them as photographs as well.
I will however, publish the pics of the wolves and I, taken by the owners of Northern Lights Wolf Centre.