I first experienced Springbrook Rainforests while touring the historic Government House in Brisbane. A painting by Australian artist, William Robinson, captured my imagination and I decided that I had to go to Springbrook and see  the magical world for myself! 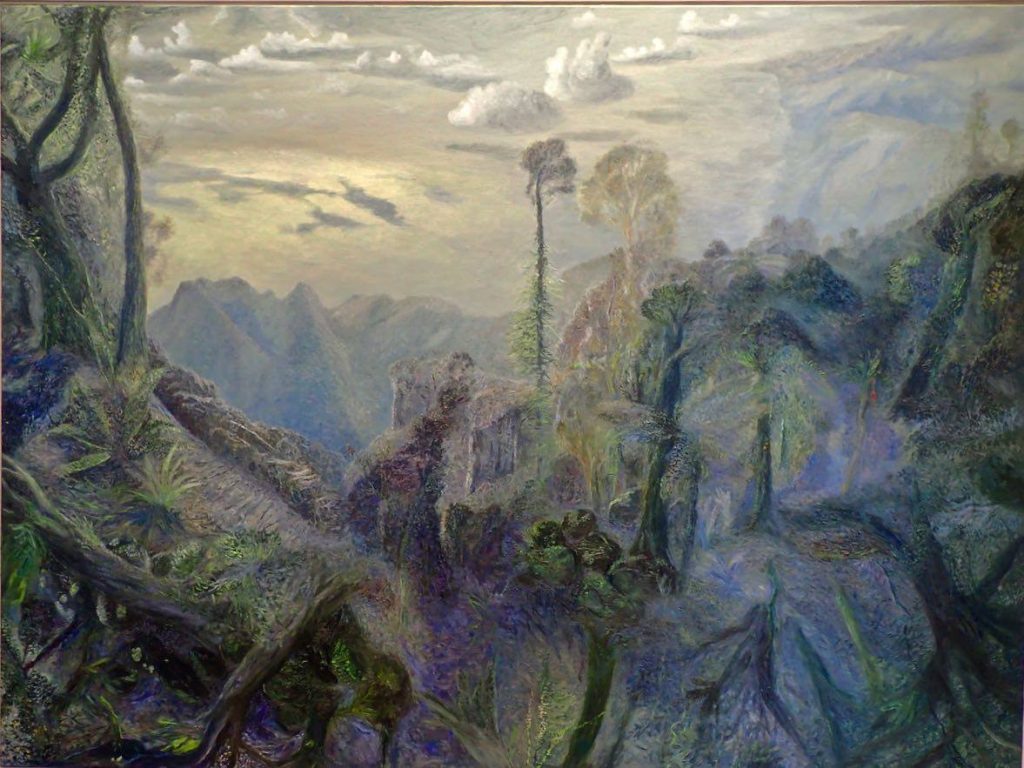 The Sea with Morning Sun from Springbrook, 1996, William Robinson, oil on linen.

View of the Gold Coast & Coral Sea from Springbrook.

Springbrook proved to be ever more fantastical in reality. The National Park has so many unique natural wonders, it requires at least a full day of exploration from sun up to dusk. Springbrook is a fabled rainforest come to life. It is teaming with fascinating life and geographical beauty: glow worm caves, waterfalls, secret swimming holes, towering rainforest trees from lost Earth, eels, death adders, carpet pythons, tropical birds, tiny forest kangaroos, koalas and so much more!

I hope you will enjoy exploring Springbrook’s ancient rainforests, waterfalls and caves with me…

The Gondwana Rainforests are some of my favourite rainforests on Earth. The forests are ancient, left over from when the Southern Hemisphere (South America, Africa, Arabia, Madagascar,India, Australia, and Antarctica) were all  attached and part of the giant continent of Gondwana. Some of the plants found in Springbrook are primitive and their species existed over 100million years ago! Over time, the continent began to break apart—approximately 140 million years ago, Australia broke away from Gondwana. 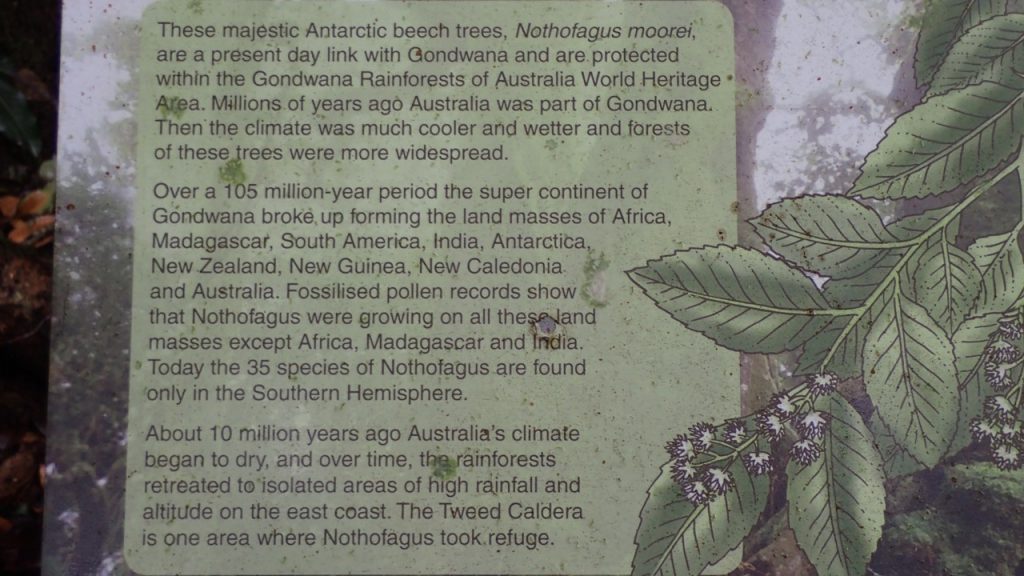 Today, Springbrook rainforest is a world of ocean mists ( the Gold Coast is easy to see from the higher elevations), towering trees adorned with twisty-jungle vines, ancient ferns and palm trees.

A view from one of the higher elevations in the park. At this altitude, the rainforests are cool and filled with mysterious mists; which is in great contrast to the lower elevation forests that are humid and hot.

Everything about the natural bridge, and the glow worm caves beneath, is fantastical. The caves are at the base of a waterfall that flows from a creek above, through a hole in the canyon rock, into the dark caves.

The waterfall in itself is a work of natural art!

The cave beneath the falls is  home to rare glow worms and tiny bent-wing bats. In the a dark caves I occasionally see flashes of the glow worms: falling little sparkling lights, as though the cave is raining diamonds.

The glow worms are not actually worms but larva of a tiny fly that exists only in the ancient rainforests of Gondwana. The forests provide the rainfall and dense canopy cover that the ancient species of fly requires.

The creek is also a natural wonder: it flows to the Coral Sea and is home to eels that are born in the sea and swim up the creek to the mountains of Springbrook to live. I was lucky to spot one of these eels in the creek above the caves. The eels are not generally aggressive but if harassed by humans, they will bite–good on them!

Above: I took this picture of an eel from a bridge above the creek.

-kookaburra hanging out in the parking lot.

Above: The top of Purling Brook Falls, Springbrook.

Me, at the base of the magnificently tall waterfall!

-nearing the base of the waterfall.

We start the hike at a high elevation and then climb far down, into the valley, to reach the base of the waterfall. The signs, warning hikers to watch for poisonous snakes, keep us on the path and alert! By the time we reached the bottom of the falls, the sun is beginning to set. We know that we have to hike up the long trail before night fall or risk the dark jungle climb without a torch!

We have no time to continue hiking to “one of the most beautiful swimming holes in Australia.” However, I will travel back to Queensland, and make sure I have time for a swim in one of Springbrook’s natural swimming holes, well before the sun sets.

A few views from the higher elevations, near the top of Purling Brook Falls.

Below: The dense rainforest jungle of Springbrook. 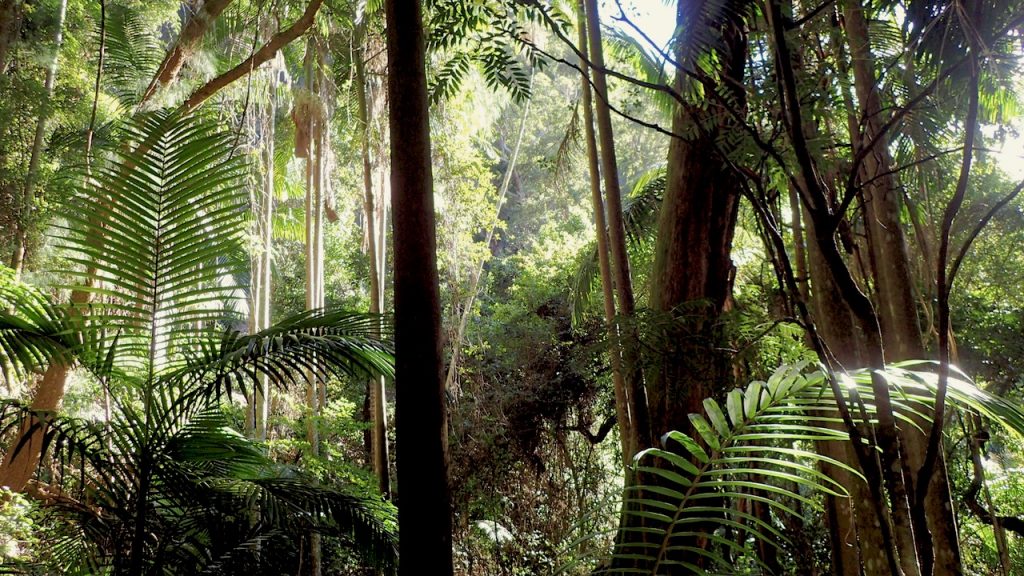 Peter and two of our girls making their way down to the base of the falls.

Above: making my way in my boot cast. I hiked everywhere in this boot! I’ve been out of the boot now for two months and my foot bone is improved but not fully healed yet.

With my eldest and youngest daughters in our embarrassingly matching U of Brisbane hoodies . My middle daughter returned to Canada early as she loves her studies and didn’t want to miss too much.

I hope this post has given you a taste of Earth’s lost rainforests. These rare forests are in desperate need of protection: with global warming, many of the species in this forest will be unable to adapt.