I took my eldest daughter, Mistaya, to NYC for her 18th birthday. We were only there for a week so we spent our time in Manhattan for our first visit. We plan on returning to see much more of NYC next time. For the next few posts, I will share some highlights of our visit. Mistaya and I had the time of our lives exploring Manhattan. Modern spiritual philosophers say, “Do what makes you feel alive.” New York makes me feel alive!

New York requires strong walking legs: when we were not walking, we took the subway everywhere, including to and from JFK airport.

We had many adventures on the subway. The stations are unbearably hot and humid in the summer but thankfully the cars are refreshingly air-conditioned. One day, a big sleeping man, sitting beside me, was awakened by his friend when his stop arrived. In his sleepy state, he punched me hard on my upper left bicep, bolted up right and shouted at me to,”Get up, Shivon—Shivon! This is our stop!” I was like, ouch…what the? He kept staring at me and shouting at me, convinced I’d miss “our” stop. He finally stepped of the subway and the door closed—saving me from a surreal, New York style, sleep walking nightmare.

Mistaya waiting for the train, on our way to see An American In Paris at the Palace Theatre. It was a musical extravaganza of ballet, song and theatre. We enjoyed the show and the 2 1/2 hours went by quickly–which meant that we truly enjoyed the show. At many shows, it often seems as though time crawls by.

The Palace Theatre is like many historical theatres with narrow, steep seating rows. Our knees banged into the seats in front when we adjusted our legs and when I bent down to pick up my dropped ($4) water bottle, the woman beside me elbowed me in the temple.

We arrived in NYC at night and stumbled our way to Manhattan and arrived at our first hotel, the Hotel Belleclaire. At one point we were lost at night, with all our luggage, in a nearly abandon, dark, dank and excruciatingly hot subway station (with no wifi), unsure what train to get on next. We bravely soldiered on, walking blocks with our luggage, guessing what direction was north or south, with only skyscrapers to guide our way. 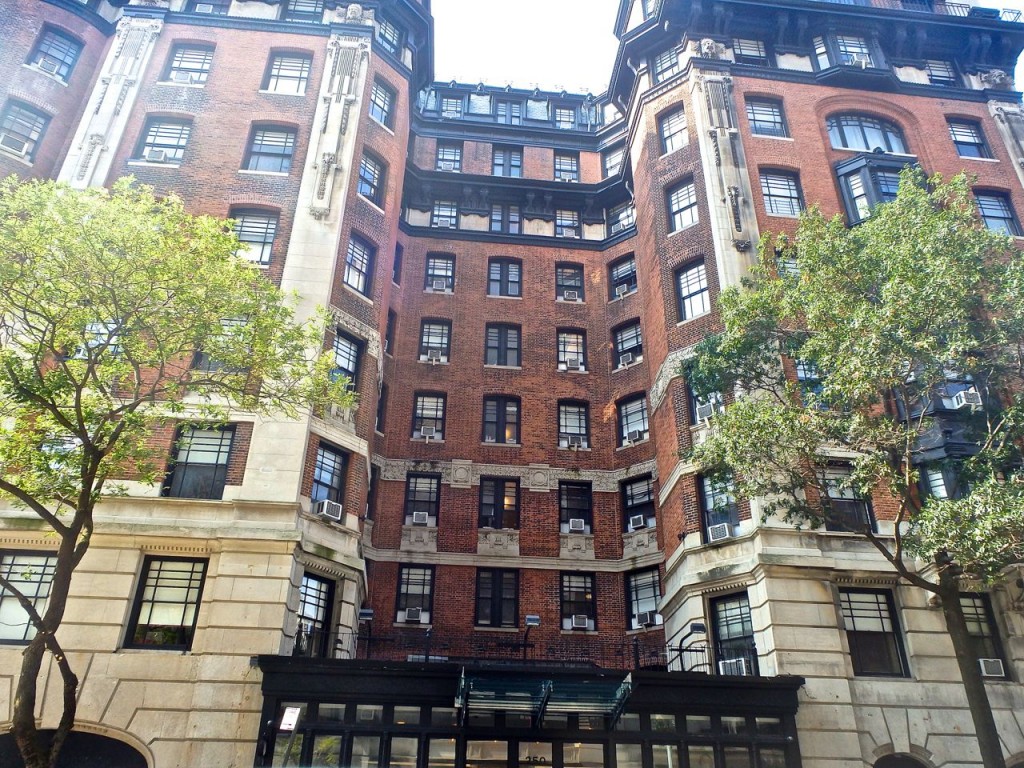 The Belleclaire is a historic NYC hotel. It’s past guests have included the Russian writer Maxim Gorky, American writer Mark Twain and Babe Ruth.  We loved The Belleclarie as it was small, quiet, intimate and historical. The narrow marble staircase, tiny old fashion elevator, and quaint retro lobby made us feel as though we were living on The Upper West Side in our own little apartment. The hotel is close to food markets, pharmacies and there are many moderately-priced great restaurants (Indian, Mexican, Italian and American food) in the area; also, it’s only 4 blocks from Central Park and the Natural History Museum. We heard no noise from inside the hotel at night but often heard the sirens from emergency vehicles in Manhattan on the streets below. Though, oddly, the sirens were softer and a higher pitch than BC sirens and we found them not as irritating.

“…historic NYC hotel was commissioned by Albert Saxe and designed by noted architect Emery Roth in 1903. One of the flashiest hotels on the Upper West Side, our landmark NYC hotel was once referred to as a skyscraper on Broadway and was first amid the most luxurious buildings in the city. Roth combined Beaux Arts principles with Art Nouveau-Secessionist style that is worthy of landmark status.”

The Statue of Liberty

Below: The statue of Liberty as viewed from the South Western tip of Manhattan.

The cityscapes in Manhattan are of such a grand scale that they often appear as though they are painted backdrops for a movie set.

The 9/11 memorial is a fitting monument to mark the tragedy. Instead of filling the space with a towering memorial, it is left as a massive hole, symbolizing what is missing. The hole is square and deep with water pouring from all sides continuously, like a 4 sided water fall. In the centre at the bottom of the deep hole is another square hole; one cannot see the bottom of the inner square hole from ground level. Water pours from all four sides of the square as well. The water pours into a seemingly endless, geometrically-designed void. It expresses a grief that is bottomless in its devastation. Names of the killed line the edges of the steel rim.

The window displays at Bergdorf Goodman are interesting. A few fashion items are strategically placed amongst skeletons of living and extinct creatures.

No trip to Manhattan is complete without at least an attempt at shopping. We headed to Macy’s and found the items on the pricy side. We decided to look for the sale floor but guess what? There is no sale floor. Manhattan has no sales. Onward to Barney’s…sigh…Barney’s makes Macy’s look like an H&M. Onward to Bloomingdale’s…sigh…Bloomingdale’s makes Barney’s look like The Gap. Needless to say, there wasn’t a whole lot of purchasing happening on our part.

Dining on The Upper West Side NYC