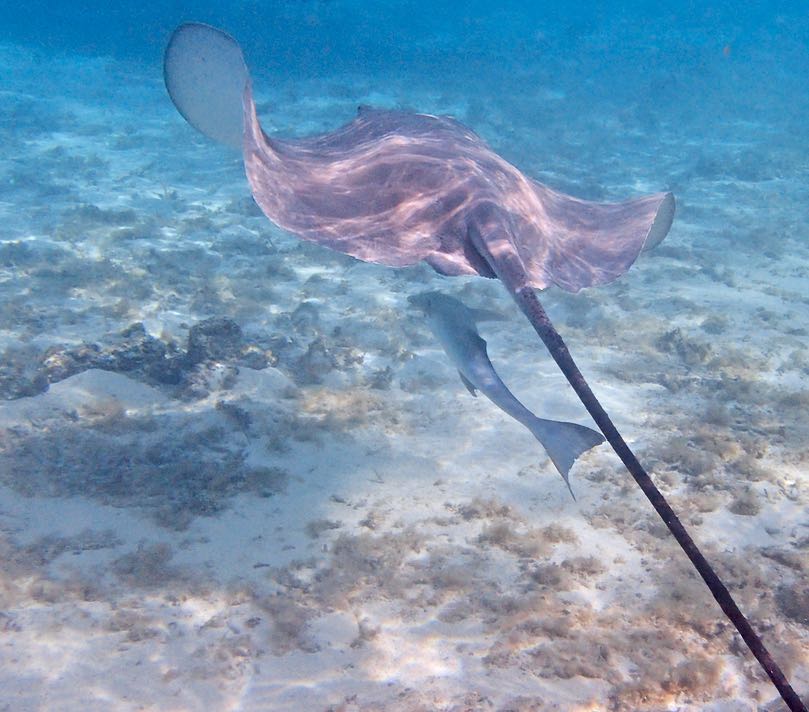 This is one of my favourite posts to date. I had the time of my life collecting the photographs for this blog.

I hope you enjoy the friendly aquatic life I discovered while snorkelling in French Polynesia.

Below: shark, needlefish and remora.

My love for Bora Bora floats in the turquoise lagoon alongside the graceful aquatic wildlife. The photographs in this post were taken by me, while snorkelling in four different locations near the Island of Bora Bora. 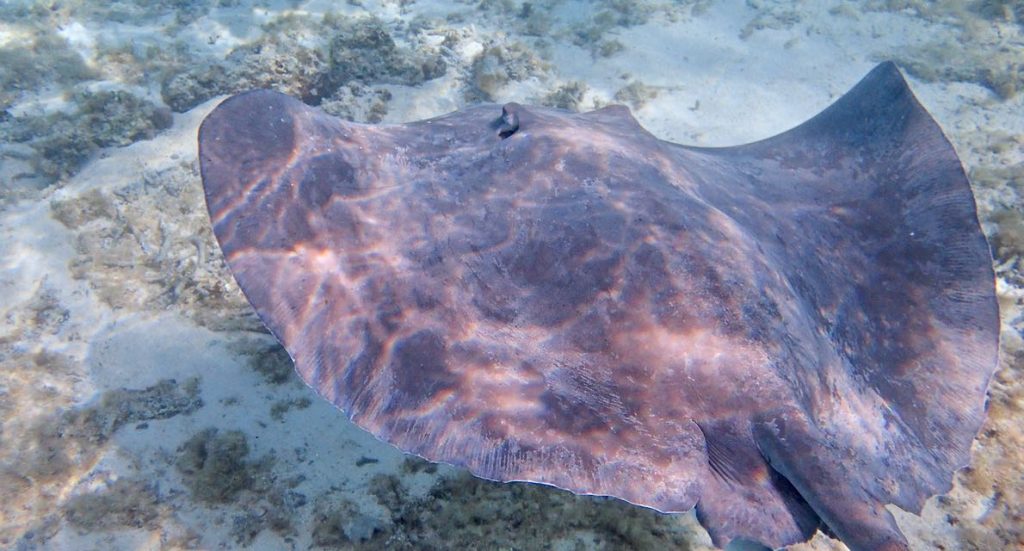 A few were taken near Matira Beach amongst the coral close to shore. Some photos were taken in the famous “coral garden” inside the lagoon, very near the huge coral reef that surrounds the island. 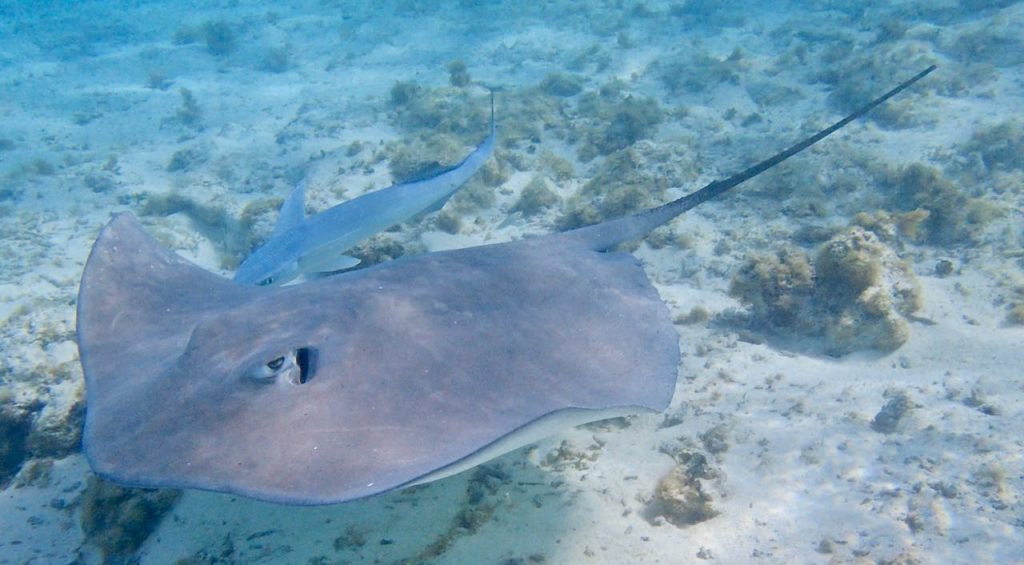 The stingrays and smaller reef shark pictures were taken in the centre of the massive lagoon, where the water is fairly shallow. The larger reef shark photos were taken on the outside of the reef, close the reef breakwater, in deep water. 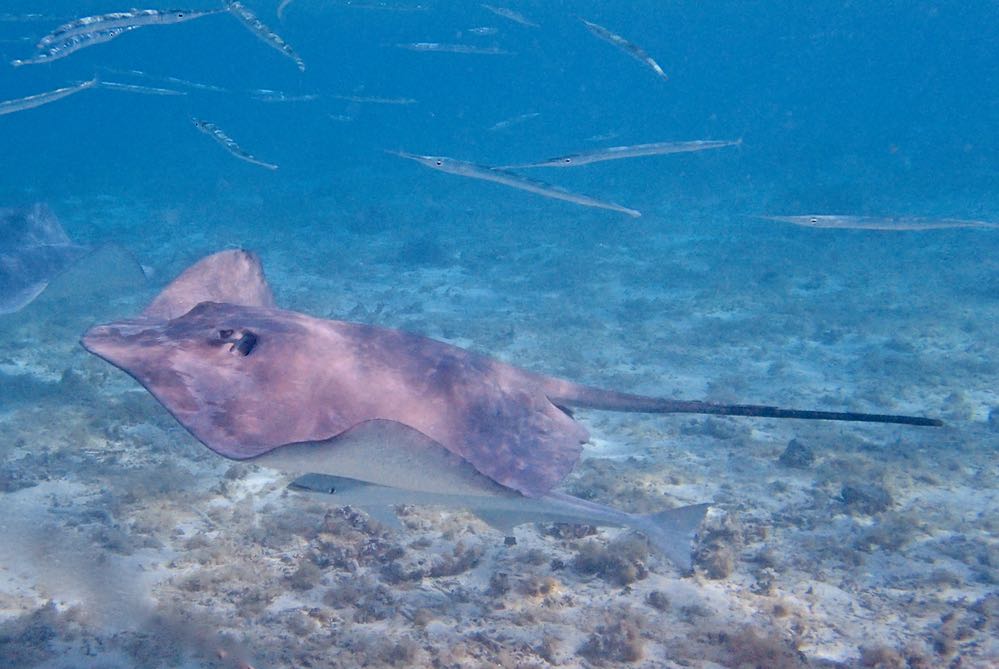 Outside the lagoon was the most fascinating yet frightening place to snorkel. The boat was anchored only about 30 meters from the reef break. The ocean was deep, turbulent and crashed in massive waves over the reef. We held onto a rope attached to the small boat and snorkelled only as far as the rope would allow. 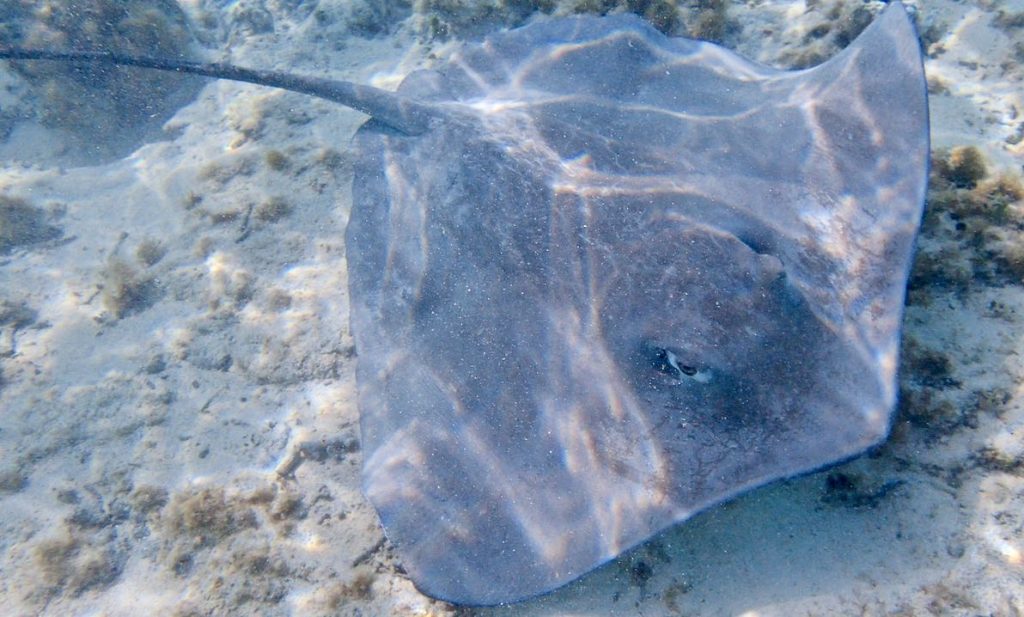 Snorkelling With Stingrays and Sharks in Bora Bora’s Lagoon

Below are a series of photos of the whiptail stingrays in the lagoon as well as smaller (4 to 5 feet in length) black tipped reef sharks and the remoras and needlefish that also frequent the shallow waters near Bora Bora. 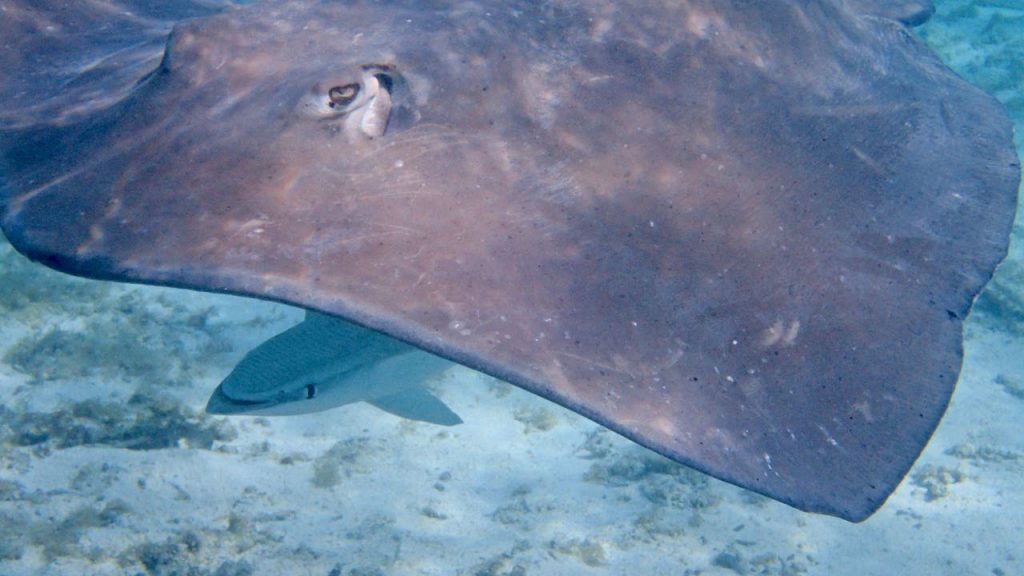 Above: a great view of a remora fish below a stingray. Remoras use the suction on the top of their heads to stick to sharks, rays or whales and catch a free ride while munching on the host’s poop (I thought they ate the hosts food scraps but no, apparently they like their host’s poo the best).

I have a deep respect for all life (wild and domesticated); thus, as much as I find the stingrays beautiful, I do not long to “pet” them as I give them their space and they return the favour. The Bora Bora rays are super friendly and used to the tourist who frequent the lagoon. They are like lap dogs and it was difficult for me to snorkel at a reasonable distance from them (to avoid any accidental contact with their tail barbs)–they want to be in my face, looking for a food treat.

I post many pictures of the stingrays simply because these creatures are the ballerinas of the sea. I am infatuated with their beauty.

Below: reef shark with needlefish above and remora below.

Below: Stingray swims to surface to say hello

It is practice in Bora Bora for the tourist boats to feed the stingrays. I really wish they wouldn’t as stingrays are easy enough to find in the lagoon without attracting them with food.

Snorkelling outside the reef will remain one of my most thrilling life adventures.

When our driver anchored the boat only 30 meters outside the reef break, everyone in the boat was nervous. Admittedly, I asked the driver if he could perhaps anchor the boat a little further from the reef. He said, “no.” That was that.

The ocean was deep and fierce with high waves crashing against and spilling over the impressive coral reef.

Pippi was nervous and waited in the boat for her parents and big sister to jump into the water and determine if it was safe for her to follow. Within a few minutes she jumped in and joined us, snorkelling amongst sharks bigger than she.

Below us, on the sea floor hovered a huge 8-10′ lemon shark. Below: Look at the sea floor in this picture to spot the impressive 8-10 foot lemon shark hovering on the bottom (upper left side of picture).

We cautiously jumped from the boat and struggled over to clutch the rope that was tied to the boat. It was imperative to cling to the rope as we snorkelled to avoid getting swept up in the strong current and be hurled over the reef.

It was thrilling and unbelievable to be in the water with so many good-sized sharks! The sharks outside the reef were much bigger than the ones inside the lagoon. Every time I came up and took off my mask, the first words out of my mouth were, “I’m in love with these sharks!” The deep water black-tipped reef sharks reached their maximum size with many a whooping six+ feet in length.

Below: fish that swim with sharks (black trigger fish amongst others).

The coral gardens inside Bora Bora’s lagoon are located just inside the reef. The water is fairly shallow but the current  is very strong. It is easy to be swept far away from the boat while exploring the multitude of coral mounds.

Below: a Tahitian clam with its gorgeous, indigo-leopard lips.

Below: butterfly fish and groupers.

Below: Clam embedded in coral. This one has emerald green, leopard-print lips.

Below: a brilliantly coloured fish amongst the coral. 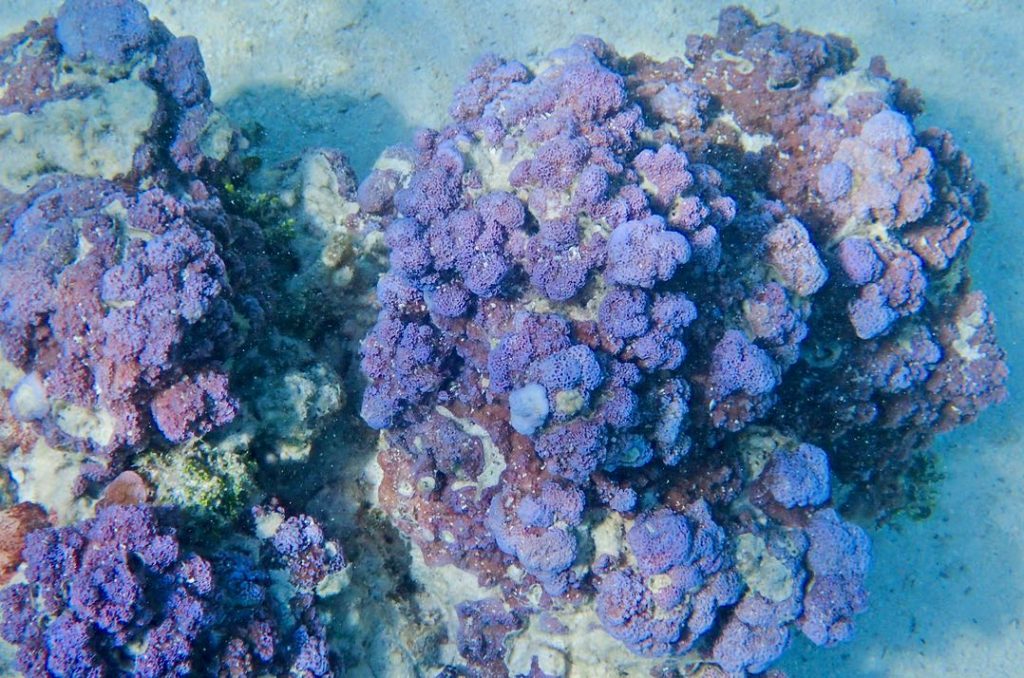 The aquatic life off Matira Beach was the most difficult to photograph as it was the most cloudy (it was near the white sand shore line). I’ve included my clearest pictures. I have dozens more of unique fish but they are a little cloudy so I’ve left them out of this post.

Below: a school of Sergeant Major fish.

Below: Picasso trigger fish. These can be aggressive but they had no interest in me and were actually some of the shyest of fishes.

Below: this living ball is basketball size. It is related to the starfish/sea-urchin.

Below: a claret coloured sea cucumber.

Bora Bora Below: a puffer fish.

Below: these fish swim near the water surface in the lagoon. They were the first creatures I saw when I stepped from the airport onto the dock on arrival at Bora Bora.